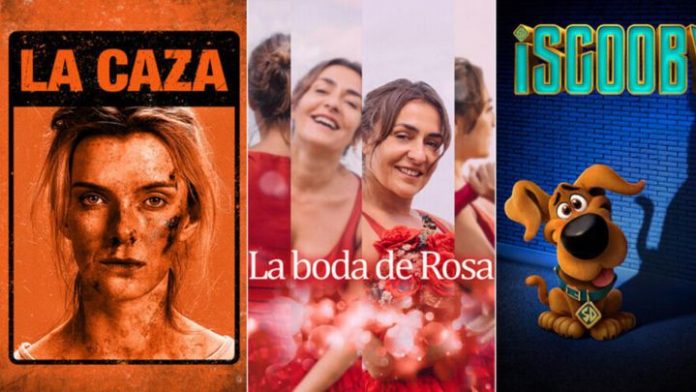 Although the most media premiere of the year is HBO this month with Zack Snyder’s Justice League, of course Movistar + comes with very interesting things for the third month of the year. March starts in 2 days, and the VOD platform will bring us as always a lot of cinema, with a little of everything.

We have for example the cute and funny and at the same time gore and bloody comedy of Little Monsters, in which a preschool teacher must guide her students to survive all of a zombie horde in a jewel for fans of the genre. There is also La Caza, a black and provocative acid critic (and satire) social covered in a modern version of the classic El Malvado Zaroff, in which a group of strangers begins to be chased and hunted in a macabre game.

There is also La Voz Humana, Almodovar’s first film in English in the form of a 30-minute short with a monologue and impeccable performance by Tilda Swinton. And Host, the surprise of the horror genre 2020 in the form of a tape that lasts less than 1 hour and is counted as a meeting by the Zoom app, in a group video call in which some friends invoke a spirit.

And for the children Scooby, the prequel to how Shaggy and Scooby-Doo, the mythical characters of Hanna-Barbera, met. In addition, on March 14 we will have the live ceremony of the 2021 Grammy Awards, with a maximum presence of nominees this year.

March 4
The family you choose

Thursday 4 at 10:00 p.m. at Movistar Estrenos (dial 30). Optimistic fable about friendship starring Shia LaBeouf, Dakota Johnson and Zack Gottsagen (young actor with Down syndrome), who play three very different characters whose lives come together in a wonderful journey full of tenderness and sensitivity.

Friday 5th at 10:00 p.m. at Movistar Estrenos (dial 30). Rosa’s life is a marathon in which she never reaches the finish line. She is always ready to help, she has become the person in whom everyone around her discharges the responsibilities of her. On the verge of collapse, Rosa steps forward and breaks with everything.

Saturday 6th at 22:00 at Movistar Estrenos (dial 30). Brisa, a new student from Barcelona, ​​arrives at the nun’s school where she studies Celia, an eleven-year-old girl conditioned by the traditional school education and by her family environment, in which there is no father. The debut feature of the year 2020 in Spanish cinema, written and directed by Pilar Palomero, which portrays Spanish society in 1992 through the eyes of the leading girls.

Unpublished cinema. Sunday 7 at 10:00 p.m. at Movistar Estrenos (dial 30). The little-known story of women recruited as spies by the British government during World War II in this drama based on the true story of three women who worked as spies for the British Special Operations Agency (SOE) in Nazi France.

Tuesday 9 at 10:00 p.m. at Movistar CineDoc & Roll (dial 31). Presented at the 2020 Sitges Festival with great public success, “Vicious Fun” is, as the title indicates, as fun as it is rampant and perverse. And he is the protagonist of this comic ‘thriller’, set in the 80s, is a conceited horror film critic, which, by mistake, ends in something like a meeting of ‘anonymous serial killers’.

Unpublished cinema. Wednesday 10 at 10:00 p.m. at Movistar CineDoc & Roll (dial 31). A good example of the current rise of South Korean cinema is this science fiction ‘thriller’ set in the underworld of the Asian country and which deals with the possible ability to transfer consciousness from one human being to another. Thus, in the film, the jumps from one body to another of a spirit will help the protagonist to reveal what has really happened to him.