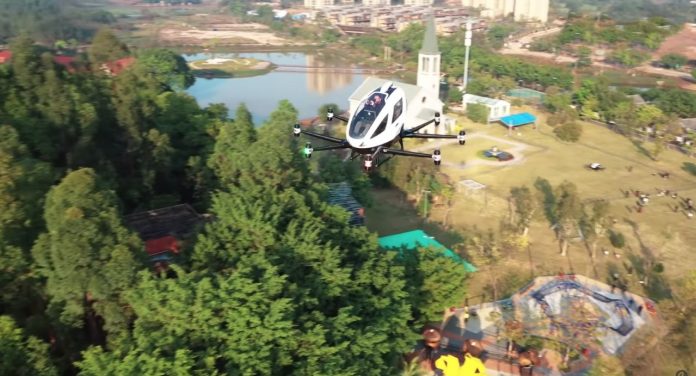 Flying vehicles that we are used to from science fiction movies have come true. Ehang, an autonomous vehicle company in China, started to serve with a driverless flying taxi.

China puts the world’s first driverless urban air transport network at the service of its citizens. In the province of Zhaoqing in Guangdong province of China, guests and residents toured the city in a flying taxi with model number EH216 AAV.

The technical features of the autonomous vehicle used have not yet been disclosed, but it was reported that the vehicle could stay in the air for 1 hour and reach a speed of 130 km per hour. The autonomous flying taxi is controlled over a 4G and 5G network. The two-seat cockpit can carry a total of 220 kg of weight and can travel 30 km at a time.

The driverless flying taxi project was created by the joint work of Chinese Ehang and Greenland Hong Kong companies. It was stated that drones, which are stated to be more advantageous than helicopters, work safer and with less noise and do not emit harmful substances into the atmosphere.

The flying taxi service will be available in other provinces of China after the tests in the pilot region. Ehang announced that he predicts that the flying taxi market will generate at least $ 9 billion in revenue in the coming years.