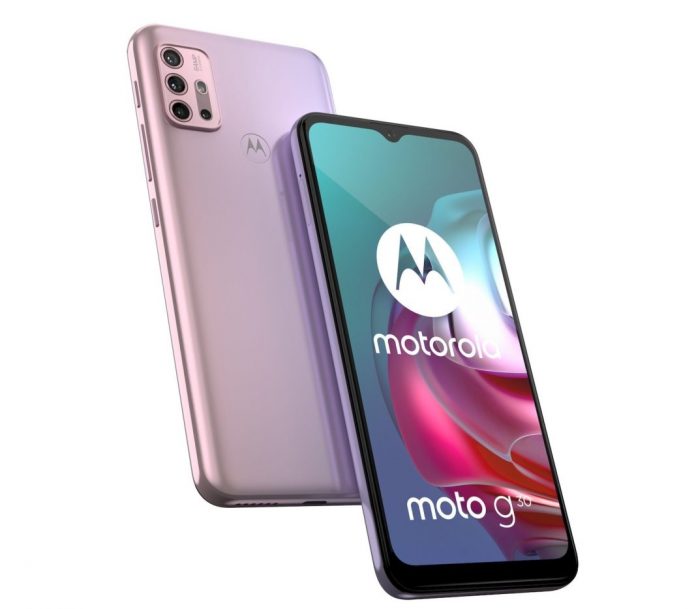 The features of these two phones are very similar. The G30 functions as a “Plus” model in this duo. Both phones have 6.5-inch screens with 1600 x 720 pixels resolution. The G30 is positioned a little higher with a 90 Hz refresh rate. The notch on the top of the G30’s display hosts a 13-megapixel camera.

Behind the Moto G30 is a quad camera system. Here, the main camera is the 64-megapixel Quad Pixel sensor. An 8-megapixel ultra-wide-angle camera, 2-megapixel macro camera and a 2-megapixel depth sensor complete the system. This system is capable of recording 1080p video.

At the heart of the Moto G30 is the Qualcomm Snapdragon 662 processor. The Adreno 610 GPU takes over the visual load on this processor. It comes out of the smartphone box with the Android 11 operating system. Complementing the pure Android 11 experience is some features added by Motorola.

Snapdragon 662 is accompanied by 4 or 6 GB of RAM. There is only 128 GB option for internal storage. MicroSD card support is available in both single and dual SIM versions.

The Moto G30, a 4G phone, has a 5000 mAh battery. This battery, which has 20W charging support, is charged through the USB-C port. 3.5 mm on the smartphone. It is also worth noting that the headphone jack is available.

The Moto G10 has a 6.5-inch HD + resolution screen. The refresh rate of this screen is 60 Hz. The 5000 mAh battery has 10W charging support. Qualcomm Snapdragon 460 processor is accompanied by 4 GB of RAM. Internal storage options are 64 and 128 GB.

In the rear camera system, the resolution of the main camera is reduced to 48 megapixels. This camera is accompanied by 8, 2 and 2 megapixel sensors. The front of the phone also has an 8 megapixel camera.

When will the Motorola Moto G30 and G10 be released?

Both smartphones are IP52 certified. This protects the phones against dust and water droplets.

The Motorola Moto G30 and G10 will go on sale in Europe in the coming weeks. The Moto G10 will be sold starting at 150 euros. Moto G30, on the other hand, will appear before users with prices starting from 180 euros.