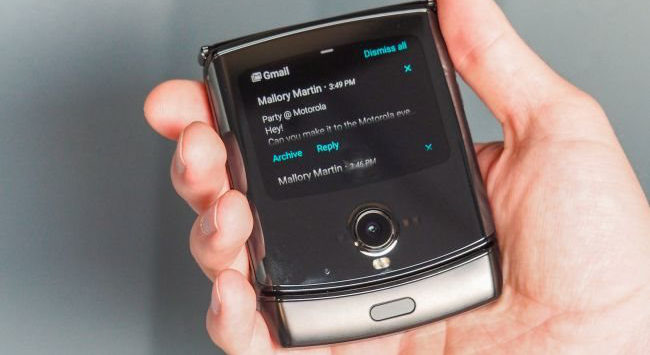 The foldable smartphone Motorola Razr, which was previously postponed, was finally opened for pre-order. The device, which will strengthen its hand in the Motorola foldable phone market, can be ordered for $ 1,500.

In the smart phone market, which has been very active in recent years, many innovations have appeared that we have not guessed before. Multiple rear camera setups, 64 MP sensors, many new design ideas for appearance were presented to users by almost every brand, and the industry has evolved significantly. One of the newest of these developments is foldable phones.

One of the devices that will be included in the foldable phone market is the Motorola Razr, which has not been released yet. Razr, which was introduced two months ago, was finally opened for pre-order. Motorola’s foldable phone; Soon it will take its place on the shelves after competitors such as Samsung Galaxy Fold and Huawei Mate X.

Known features of Motorola Razr:
Motorola Razr; it is currently available for pre-ordering on Walmart, Motorola and Verizon websites. The price of the device on these sites is $ 1,500. Razr, whose case is made of stainless steel, using 3D Gorilla Glass for its screen, has a black color that emphasizes its smooth lines.

The ‘gapless hinge’ used in the phone provides a clean protection of the bendable polymer screen. This feature prevents dust and other impurities from entering the phone. The screen size of Razr, which is also water resistant, is 6.2 inches. The phone, which has a screen format of 21: 9, is very portable when folded.

‘Quick View’ panel that can be used without opening the screen:
When we move to the outer part of the phone, the 2.7 inch sized ‘Quick View’ screen first meets us. Control of applications such as music player, Wi-Fi or Bluetooth settings, opening camera, messaging and answering calls can be easily performed on this screen.

‘Windows 96’: Microsoft System Gains Version That Runs On The Web