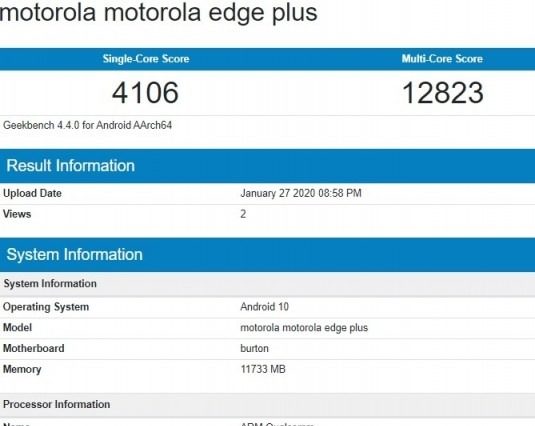 Motorola’s highly anticipated new flagship phone, Motorola Edge Plus, was spotted in Geekbench. The device, powered by 12GB of RAM, seems to score 4,106 points in single-core tests and 12,823 points in multi-core tests.

Motorola, which attracts attention with its vertically folding smartphone Razr 2019, is working on a new flagship. The smartphone named Edge Plus, which was recently discovered by leak master Evan Blass, is expected to come with a smart pen like Samsung’s Galaxy Note models.

Motorola Edge Plus, which has already created a great expectation, appeared on Geekbench charts. Although the list in question does not specify the name of the processor, we expect to see an eight-core Qualcomm chipset at 1.8GHz on the device. According to the Geekbench list, Motorola Edge Plus, which will come with 12GB of RAM, has achieved 4.106 points in single-core tests and 12.823 points in multi-core tests.

Motorola Edge Plus Geekbench results
The hardware features of Motorola Edge Plus have not been revealed yet. However, the device is said to have a perforated screen with curved edges. Also, as I mentioned above, there may be smart pen support on the phone.

The device will likely be supported by the Snapdragon 865 processor. The mobile platform, the newest flagship processor that supports Qualcomm’s 5G connection, was introduced late last year. If the Snapdragon 865 really is at the heart of Motorola Edge Plus, it is quite likely that the device has 5G technology.

That’s all we know about Motorola’s new flagship for now; however, we anticipate that more details about Edge Plus’s display, camera, storage and design features will be revealed in the coming days.