Home Tech Motorola 4K Android TV is on sale: Here are the features 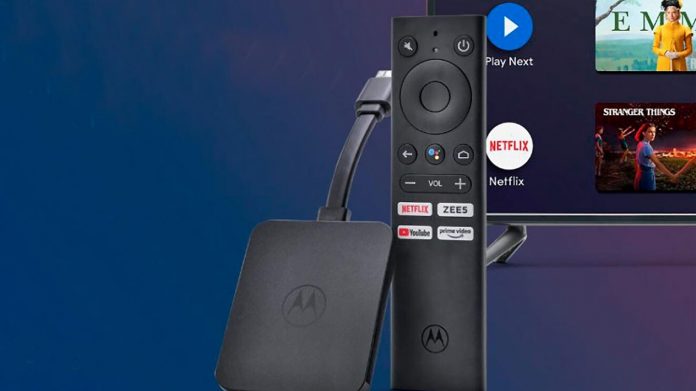 Motorola announced the 4K Android TV stick. Launched by the company’s business partner in India, Flipkart, the device is equipped with 2 GB of RAM + 16 GB of internal memory. Compatible with Android TVs, the stick has built-in Chromecast support that allows users to mirror their phone screens to the TV.

The Motorola AndroidTV stick is powered by a quad-core Cortex A53 64-bit processor and Mali G31 MP2 GPU. Working with Android 9.0 Pie operating system, the device can play 2160P, 1080P and 720P resolutions at 60 frames per second and also supports HDR10 and HLG video formats.

The device provides fast access to services with its remote control, Netflix, Amazon Prime, Zee5 and YouTube shortcut keys. It supports both 2.4 GHz and 5 GHz WiFi bandwidths. The device also has Bluetooth support.

The device that comes with the Google Play Store application can run all applications and games that are compatible with the Android TV platform. 4K Android TV stick with Engine that also supports Google Assistant; It can do all kinds of operations that require remote control with voice commands.

Flipkart has launched the Motorola 4K Android TV stick in India at Rupees 3,999. It is not known whether the device will open to the global market outside of India.

Servers in Rust: how to create them and which are the...