Home Entertainment Moto Razr 2022: What to expect from the new Motorola folding model 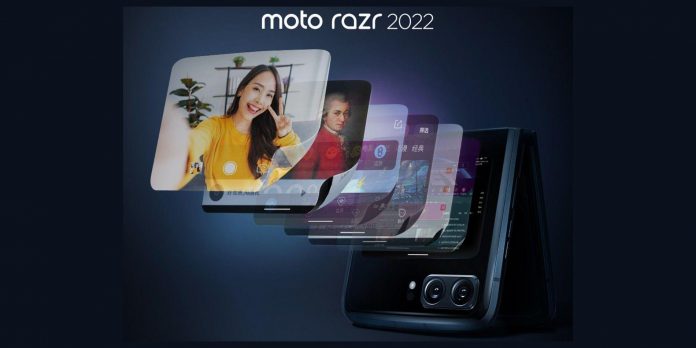 The launch of the Moto Razr 2022 on August 2 will mark Motorola’s return to the foldable smartphone category after a two-year hiatus. The new Razr will be Lenovo’s third attempt to create a folding smartphone, and it will compete with the Samsung Galaxy Z Flip 4, which is scheduled for release on August 10.

In addition to the Moto Razr 2022, Motorola’s presentation will also feature a second flagship smartphone called the Moto X30 Pro. The phone will have a Snapdragon 8+ Gen 1 chip and 125W fast charging. However, the highlight of the phone will be its 200-megapixel rear camera, the first on a smartphone.

The Moto Razr 2022 will feature an updated design that starts with an improved hinge system. It will also have a larger display with a diagonal of 6.67 inches. The new screen got rid of the notch in favor of a hole in the center, and also got rid of the protruding chin of the Razr 5G. Earlier it was reported that the phone will have an enlarged cover display, but the information found in the database of the Chinese certification agency TENAA says the opposite. The certification page shows that the size of the protective screen is 2.65 inches, which is slightly smaller than the 2.7-inch Razr 5G display. However, teasers published by Motorola show that the display on the cover will receive additional functionality.

Similar information was shared by the Chinese informant Digital Chat Station. According to him, the Razr 2022 is equipped with a 6.67-inch main OLED display with a resolution of 2400 x 1080 and a 2.65-inch OLED screen with a resolution of 800 x 573 for an external display. An earlier report stated that the main display would have a refresh rate of 120 Hz. It was also confirmed that the phone will be equipped with a Snapdragon 8+ Gen 1 processor combined with 12 GB of RAM and 512 GB of internal memory. Surprisingly, the TENAA certification page mentions that there will be a version of the phone with 18 GB of RAM. Previous reports have shown that the Razr 2022 will have two rear cameras. The main rear camera will have a 50 MP sensor and will be paired with a 13 MP ultra-wide-angle camera. In addition, the front-facing camera has also been upgraded to a 32-megapixel sensor.

Both sources also confirmed that a significant upgrade has been made to the battery. The TENAA certification page shows that the Moto Razr 2022 will have a two—cell battery, one of which has a capacity of 660 mAh, and the other has a capacity of 2660 mAh, which totals 3320 mAh. Although this is more than the 2800 mAh battery inside the Razr 5G, in fact this value is the nominal capacity. The actual battery size, according to Digital Chat Station, is 3500 mAh. The informant also said that the Razr 2022 will support 33W fast charging. This is a significant jump from the 15 watts supported by the 2020 model. Motorola made the right decision by increasing not only the battery capacity, but also the charging technology. This should give it an edge over the upcoming Galaxy Z Flip 4, which reportedly has a slightly larger 3,700 mAh battery, but a slower 25W fast charge.

Razr 2022 should run Android 12 with MY UX from Motorola. It will also have a side-mounted fingerprint scanner, a physical SIM card slot (since eSIM support is not common in China) and a USB-C port for charging. It will be heavier than the previous generation by 200 g, but slightly thinner by 7.62 mm. The phone is expected to cost 1,149 euros ($1,178) in Europe, which is cheaper than the cost of the Razr 5G at launch. Moto Razr 2022 will be announced first in China, and an international launch is expected soon.