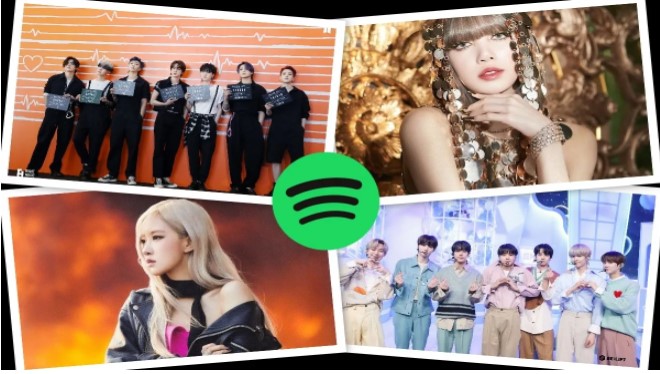 Spotify is a great platform for K-Pop fans, since in it we can find many songs from our favorite idol groups, what tracks were the most listened to in this streaming app?

Throughout 2021 we had great songs that our favorite K-Pop artists released to delight all their fans and new admirers who joined the many fandoms that exist in this musical genre; good music is not lacking throughout the year.

Many idol groups triumphed this year with their different singles and albums, there were also soloists who shone and even surprised the industry with their great compositions that became popular at some time; K-Pop groups have great achievements not only in physical sales.

Digitally, there were also boy bands and girl groups that stood out thanks to the great streaming that the different fanbases are responsible for and Spotify is one of the favorite platforms for fans to listen to their favorite K-Pop band.

BTS’s ‘Butter’ was the group’s biggest hit in 2021, the catchy composition managed to get everyone’s attention that quickly became ARMY, this track was highly awarded during the year and its popularity shows its brilliance.

Once again, BTS takes over the top with their songs and ‘Permission To Dance’ was also widely listened to on Spotify during 2021, ARMY never stopped streaming and managed to place the new songs of their fav group in great positions.

3. My Universe by BTS ft. Coldplay

Bangtan Sonyeondan not only triumphed with their songs, but also with their collaborations, ‘My Universe’ was a special song that united BTS and Coldplay in a track full of love, rock and K-Pop were united for the fans of both groups. .

BLACKPINK’s Lisa debuted as a solo artist in 2021, with her album ‘Lalisa’, she conquered the senses of millions of fans who loved her song ‘Money’, breaking different records with this track and making it very popular on Spotify.

5. On The Ground de Rosé

In early 2021, BLACKPINK’s Rosé shone as a solo artist and her song ‘On The Ground’ managed to become super popular, BLINK showed their full support for the BP singer on different platforms and Spotify was one of them.

For the album, ‘BTS, The Best’, Bangtan released ‘Film Out’, another of their most streamed songs on Spotify during 2021, proving once again the great popularity of this boy band in K-Pop.

The title track of BLACKPINK’s Lisa’s debut album also made a hit on Spotify with ‘Lalisa’ being one of the most listened to songs on the platform.

The BLACKPINK girls continued to dominate during 2021 with their solo songs and that is why we also found ‘Gone’ by Rosé in this great top of the most listened songs on Spotify during 2021.

Despite being a fairly young K-Pop group, ENHYPEN demonstrates its great dominance and popularity with ‘Fever’, one of the most listened to songs on Spotify of this South Korean musical genre, a composition that we could hear on their album ‘ BORDER: CARNIVAL ‘.

10. ITZY’s Mafia In The Morning

ITZY is a girl group that has quickly won the love and admiration of millions of fans, all of whom supported one of the songs by these amazing girls, ‘Mafia In The Morning’ gained huge popularity on Spotify thanks to MIDZY.

Was your favorite song on this ranking? Surely you played it many times on Spotify, each streaming counts and we have many compositions of our favorite K-Pop groups that we can enjoy on this platform.

Pregnant Rihanna and ASAP Rocky Pack on the PDA while on...