Home Entertainment Moss: Book 2 – How to Pass the Mountain (Chapter 4) 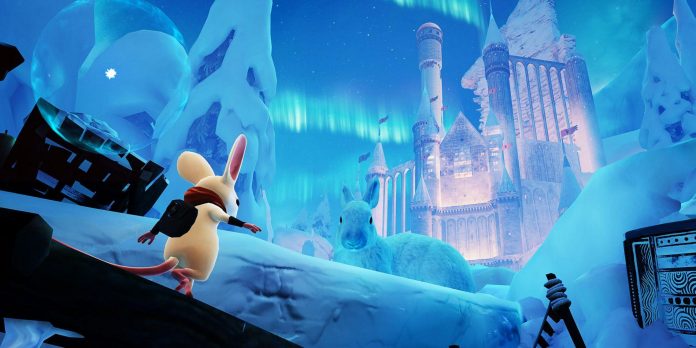 The mountain will be visited in the fourth chapter of Moss: Book 2, and you will have to solve many difficult puzzles. By completing the Mountain, players will gain new abilities that will change the approach to solving puzzles. This chapter also introduces new enemies that can help solve some puzzles. There are eight scrolls to collect while exploring the Mountain and completing the fourth chapter.

After Quill falls from Tylan’s attack and loses the glass shards, the Reader will be separated from her. To reunite with Quill, the Reader must team up with Sahima and protect the last shard of magic glass from Tylan. At first, Sahima resists, so several scenes will be played in which the Reader chases after her to convince her to help. Eventually, players will be able to control Sahima and try out her new unique Chakram weapon in Moss: Book 2.

Sahima will stand on the ledge and look at the castle when the players gain control of her. A sphere with a purple stripe in the middle can be broken to move on. From the starting ledge, Sahim can descend and go to the right side of the screen, then climb up the vines. Sahima needs to stand near the purple barrier facing the ball, then hold down the attack button. The reader will need to activate a charged attack, then Sahima can throw his Chakram across the chasm to hit the ball. When a charged Chakram is thrown, it pierces walls and other surfaces, so players will need to press the attack button again to recall it.

The next section is a combat test with a new enemy. There will be a cannon that fires mines, so Sahima can either approach and run away, or throw a Chakram at her so that she explodes at a safe distance. There will also be other enemies that appear from holes around the perimeter of the arena. After all waves of enemies are defeated, the barrier is deactivated and the cannon retreats. Sahima can go to the next room and use the boards to get over the ice. Players will need to climb up, throw the Chakram into the wall, jump down to level it, and then summon it back to break the ball. This deactivates the shield around the square block, then the Reader can move it so that Sahima can get to the far ledge and exit the area.

In the next diorama, players can immediately walk along the path on the left, then climb a wooden ladder and walk to a ledge where creepers grow, which the Reader can make grow. The path through the cave will lead to the upper platform next to the wheel. From there, Sahima can destroy both spheres. The one on the left deactivates the barrier on the left where the scroll can be collected. The one on the right will lower the shield around the wheel so that the players can finish solving this puzzle. If the Reader grabs the wheel, the rope holding it will break and it will fall on the ice. The wheel can be turned to the left until the players see a rounded object sticking out of it. Pulling on it will reveal a hole in the wheel that Sahima can use to get to the other side. Sahima can then climb onto the wheel to reach the upper platform and exit the zone.

In the next section there will be another cannon, and the Reader can take control of it to shoot the ball in the right rear corner of the diorama. Sahima can climb to the left to get to the ledge with a cannon on it. By shooting the sphere, Sahima can destroy the cannon or simply dodge it, then climb over the ledge on the left and climb up to pull the lever. The gate lock will be removed, opening access to the next area. Before moving on, you have to complete a combat mission with several waves of enemies, including a couple of guns, which this time you need to destroy.

There is one more area that needs to be traversed before the Reader can reach the castle and return to Quill. Like the previous wheel, what is in the water can be rotated to gain access to the protruding sphere. The reader can take it off so that Sahima can walk and climb the ramp, pull the lever and continue solving this difficult puzzle. A cannon will appear from the hole where the gate was raised. The reader can take control to shoot a sphere on top of another wheel.

To destroy the hanging ball, Selma can throw the Chakram into the wall under the first barrier, and then return to the entrance, using vines to climb up. The chakram should line up so that when Sahima calls him back, he destroys the ball. The reader can then rotate the upper wheel so that the Sahima can get into the hole and get to the ledge with the pressure plate. Standing on it, you will find another hole in the wheel with a sphere inside.

BTS’s Jimin Owns The Bag Everyone Would Love To Have In...