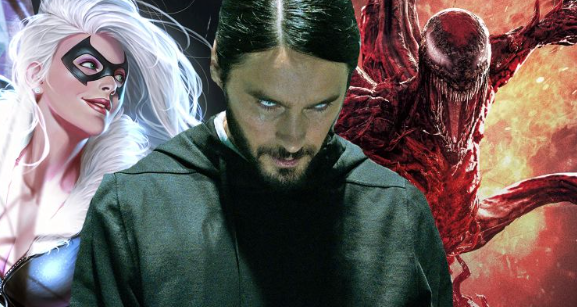 Like any Marvel movie, Morbius is full of Easter eggs, many of which point to the future of Sony’s Spider-Man universe. Have you noticed them all?

Superhero movies are famous for their Easter eggs, and here are all the references to Spider-Man and Marvel found in Morbius. Sony has long dreamed of building a common cinematic universe using the MCU formula, and the Venom films served as a launching pad. Morbius is the second stage, an attempt to present a second franchise, which the studio hopes will prove to be a strong performer, and the scenes after the credits of Morbius point the way to future parts.

Most Marvel movies are full of Easter eggs, but Morbius has surprisingly few of them. Many of the main Easter eggs of the film were actually shown in trailers, and some of them were not included in the final version, including the image of Spider-Man by Tobey Maguire. However, there are other, less direct Easter eggs of Spider-Man— in the comics, as well as in the Maguire Spider-Man universe.

With that in mind, here are all the Marvel and Spider-Man Easter eggs in Morbius. Some of them are just funny references and appeals, but others may well help determine the shape of Sony’s future Spider-Man universe. And some, surprisingly, go beyond the Spider-Man franchise to pay homage to other Marvel heroes.

School for gifted children — a funny reference to the X-Men

Impressed by Morbius’ genius, Dr. Nichols suggests sending his ward to a “school for gifted children.” This is a funny Easter egg of the X-Men, because Professor X is known for running the “Xavier School for Gifted Youth”. This, of course, doesn’t mean that Professor X and the X-Men exist in Sony’s Spider-Man universe, or that Michael Morbius went to school with members of the X-Men; sometimes an Easter egg has no additional meaning other than just a nod to the idea.

In Sony’s Spider-Man universe, Michael Morbius is the director of the revolutionary company Horizon Labs. Horizon Labs is important for the knowledge of Spider-Man, because in the comics Peter Parker himself worked there for a while and used their technology to create equipment for his alter ego Spider-Man. Morbius did work for Horizon for a while, using their resources to try to cure his vampire disease. Perhaps Horizon Labs will serve as a resource source for various characters in the Sony Spider-Man universe.

The origin story of Morbius is taken straight from The Amazing Spider-Man.

The origin story of Morbius is almost perfectly reproduced from the comics. As in Amazing Spider-Man #101, he conducts his illegal genetic experiments while in international waters. However, they are wrong and he hunts down the mercenaries manned by the ship before diving overboard. The boat in the Morbius is called Murnau in honor of the German film director F. V. Murnau, the first director who revived Dracula on the big screen in the 1922 film Nosferatu.

Morbius Returns The Daily Bugle — with a Familiar Cap

Morbius brings back the Daily Bugle, apparently New York’s favorite newspaper in this reality, because copies are shown throughout the film as a recurring Easter egg. There is no mention of the owner of the Daily Bugle J. John Jameson or photographer Peter Parker, but interestingly, the title is taken from Tobey Maguire’s Spider-Man trilogy, suggesting it’s a very similar timeline. While most of the front pages are dedicated to Michael Morbius himself—every iteration of the Daily Bugle seems to love sensational stories, and “Vampire Murders” ticks the right box—there are teasers for other Spider-Man characters as well.

The Great Chameleon Escape Can Become a Kraven Hunter

One issue of the Daily Bugle mentions “The Great Chameleon Escape”. This is a clear allusion to Chameleon, the master of disguise, who is usually considered one of the most dangerous enemies of Spider-Man. Dmitry Smerdyakov is a master spy who first crossed paths with Spider—Man when he framed Crawler for his own crimes; although he was defeated, Chameleon became obsessed with Spider-Man. Sony recently selected “White Lotus” actor Fred Hechinger to play the Chameleon in its upcoming Kraven movie, which makes sense; In the comics, Chameleon is the half-brother of the main character of this film, Kraven the Hunter.

Another issue of the Daily Bugle has a teaser: “Black Cat: Friend or Foe?” In the comics, Felicia Hardy is a thief and cat burglar who inherited her father’s mantle as a Black Cat, and has an ambiguous relationship with Spider-Man; sometimes they were enemies, sometimes allies, and even lovers. Sony has long been interested in bringing the Black Cat to the big screen, and Felicity Jones played the role of Felicia in The New Spider-Man 2, where she played Harry Osborne’s assistant, although most of her scenes were cut.