Home Entertainment Morbius Is Against. Minions: how do memes affect the success of a... 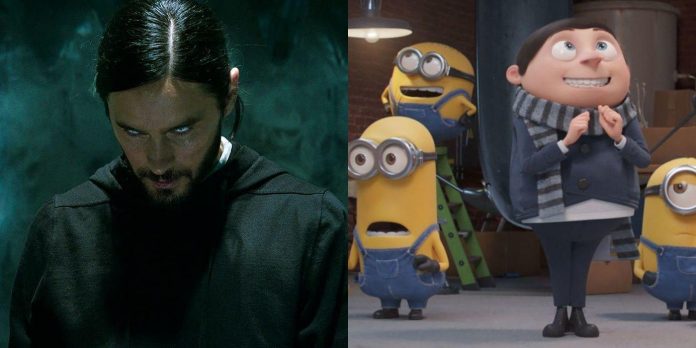 In the vast corporate mass of Sony and its endless army of well-paid professionals, a single question burns its way into every short-sighted discussion of marketing trends. Producers, wealthy financiers and potential trendsetters are tearing their hair out, demanding to know why the huge memetic potential of their film did not lead to box office success. Now things have only gotten worse when they have a perfect example of how things should have been.

Sony’s latest entry in their unimpressive Spider-Man cinematic universe was a mild box office disappointment that would have been negligible if they hadn’t doubled down. In its current state, the film is the laughing stock of the superhero craze. Meme culture, however, moved to a new goal and contributed to its rapid rise.

Those who pay attention to the ebb and flow of meme culture on social media have probably already heard this story. The new cinematic focus for this demographic is “Minions: The Rise of Gru,” the fifth installment of the Despicable Me franchise and the sequel to 2015’s “Minions.” The premiere of the film was postponed for two years due to the pandemic, but marketing for its release did not abate. It can be argued that franchise marketing is one of the most common cultural images on Earth, and minions of the same name appear on every conceivable product. The memetic reaction, however, was a little more unpredictable.

The current minion-related trend is encouraging the crowds of Generation Z TikTok fans to put on their best costumes and watch the movie in cinemas. While most of these cheerful young people were decent and polite, some turned the viewing into a crazy rave. Some theaters have resorted to banning well-dressed groups of young people from buying tickets, apparently unaware of how the word “no” to a teenager will affect their ambitions and cunning. This contradictory trend increased the film’s public credibility, and also provided the producers of the second theatrical run of Morbius with something they could point to as the best script. Why did memes revolt Gru when it seemed that they were only happily helping to bury a Living Vampire?

The obvious answer is: they didn’t. If someone deletes TikTok tomorrow, it probably won’t affect the box office of any of the films. The memetic reaction to Morbius arose because of his perceived lack of quality and existed in order to enjoy a movie in which he did not seem to be. No one was interested in the Michael Morbius movie, the trailers looked rough, and people were tired of superheroes. Such an unnamed person like him could not fight the wave of fatigue, so people decided to have a little ironic fun dancing on the grave, in which, as everyone correctly assumed, he would be. the world right now. Children’s films have always been well collected at the box office, so the sequel to “Minions” received guaranteed millions from devoted fans consisting of children and parents. Meme or no meme, the failure of Morbius and the success of the Minions were written by the stars, and social networks cannot change them.

Although the overall box office is hardly associated with a memetic response, it’s still worth asking why the collective mind approved Illumination’s latest product. It doesn’t look like it’s a loser’s story. Both films are high—profile intellectual money grabs before they become anything else. Whether it’s a desperate attempt to link a sick brand to a larger competitor or the release of another average children’s comedy to sell several billion more toys, neither is particularly inspiring. The memetic response would be quite predictable for anyone who watches social networks and reads the notorious tea leaves.

If there’s one thing meme culture likes to embellish, it’s a children’s movie. The Shrek franchise sits on an unshakable throne from which it will never be removed. From Bee Movie to Megamind, there are countless large and small memes surrounding the children’s media of the 2000s and 2010s. This coincides with the colossal power of nostalgia that dominates online culture so much. Children who first saw “Despicable Me” at the age of 6 are 18 today. The overwhelming presence of the franchise outside of the big screen ensures that countless children have seen these little yellow creatures every day of their lives. These elements are also related to the ongoing pandemic, which is why many do not go to the cinema. The desire to return in style is understandable, and the trend requiring participants to make an event out of a trip to a local multiplex is ideal. This bizarre perfect storm puts Rise of Gru in an unfathomably perfect position to profit from meme culture. Minions: The Rise of Gru may be the biggest beneficiary of memes ever created, the only thing that could displace it is the theoretical release of another Shrek.

In the end, it remains a story about the blindness of those who earn six-figure sums to know what will be popular.