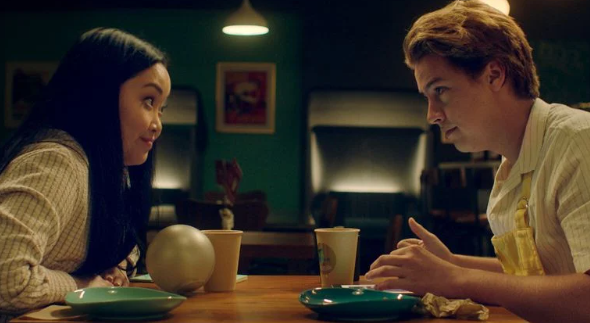 All in all, Condor & Sprouse are adorable in a very cute, very well-made and well-acted romantic comedy set in outer space.

Moonshot takes the concept of “to the moon and back” literally. Thanks to the strength of its lead actors, Moonshot intends to entertain in a fun, charming sci-fi romantic comedy that leans less on the scientific side of things.

Moonshot follows the adventures of Walt (Cole Sprouse) and Sophie (Lana Condor), an unusual duo who came from different worlds, but they are united by mistaken attempts to save their romantic relationship. Walt is an unlucky college student who is desperate to go to Mars in search of adventure and experience something that will help him find his place. Sophie is a successful Type A student who, along with her boyfriend Calvin (Mason Gooding), strives to do great things to save the Earth. Walt and Sophie’s partners, Ginny (Emily Rudd) and Calvin are on Mars. To be with them, Sophie must overcome her fear of flying, and Walt must hide. Forced to stick together for fear of Walt’s discovery, the two embark on an emotional and fun journey of self-discovery and perhaps find love for each other.

Moonshot is aesthetically and visually pleasing, reminiscent of the original Disney Channel movie Zenon: Girl of the 21st Century. research. The cinematography by Brendan Uegama, the production design by Eddie Matazzoni and the costume design by Stephanie Lewis are combined with a cute script, creating a very pleasant viewing experience.

Lana Condor brought to her the most beloved charm of those days when she played Lara Jean in the films “All Boys”. Sophie isn’t too different from Lara Jean, she’s just a little more neurotic. Cole Sprouse also plays a very familiar character, skillfully using his repertoire of previous roles. These two have chemistry working on the same wavelength, and they bring the right amount of sweetness and seriousness to a science fiction novel. The struggle of their characters, no matter how trivial or serious, is easily expressed by two actors.

Moonshot isn’t too concerned with realism. The security protocols that allow Walt to hide are simply impossible, and it’s unlikely they would be presented in such a simpering form if they were ever successful. However, no one is watching a sci-fi romcom about two young people in love who make an incredible trip to Mars just because they can. And that’s a big part of the charm of the movie. Too often, movies that should be consistently interesting get bogged down in trying to be accurate and realistic. In fact, Moonshot seems to be having fun talking about it in the third act recounting Walt’s stowaway journey.

The only thing that works against Moonshot is that it’s maybe 15 minutes longer, and the third act is messing around to tie everything in a nice bow. There’s also the introduction of selfish billionaire Zach Braff, who takes up too much screen time that could be spent trying to get Sophie to adjust to being with her long-distance boyfriend. In the third act, too much time is devoted to Walt at the last stage of his emotional journey. Sophie and Walt have a satisfying ending, but Sophie’s ending is less exciting as the film loses sight of her and her journey as soon as they touch base on Mars. Sophie doesn’t get the emotionally satisfying conversation she’s supposed to have with Calvin—at least not on screen.

In general, Moonshot is a very nice, very well—made and well-played romantic comedy set in space. Condor and Sprouse light up the screen and make every stupid remark or penitent dialogue seem natural and organic. Efforts are being made to make the most of the setting, a mix of genres and an ensemble of delightful actors. Ultimately, Moonshot is a very enjoyable experience, despite being misnamed, as Walt and Sophie’s adventure takes them to Mars, not the moon.

NASA will force SpaceX to make unmanned flight to the Moon