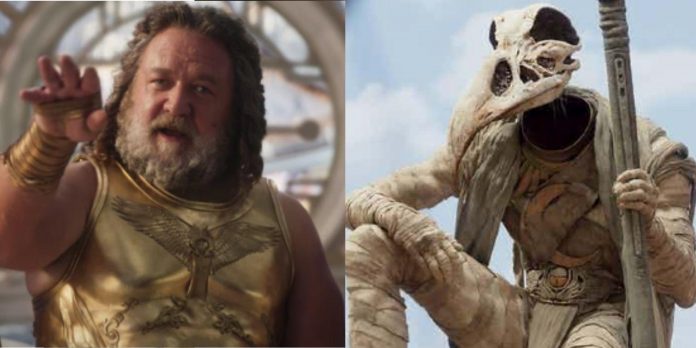 Jeremy Slater, creator and head writer of the series “Moon Knight” from Marvel Studios, revealed new details about the creation of the popular series. In his interview, Slater mentions how he treated the Egyptian gods in light of the upcoming film “Thor: Love and Thunder.”

Slater’s “Moon Knight” became the sixth Marvel Studios series to be broadcast on Disney Plus under the auspices of the MCU. “Moon Knight” was preceded by “Vandavision”, “The Falcon and the Winter Soldier”, “Loki”, “What If…?” and “Hawkeye”. Mohamed Diab headed the Moon Knight directing team, which also included Aaron Moorhead and Justin Benson. Additional cast members include Mae Kalamawi and Ethan Hawke.

link: Chris Hemsworth Reveals how long He Wants to keep playing Thor after “Love and Thunder”

A huge part of “Moon Knight” is Mark Spector and Stephen Grant’s relationship with Honshu, the Egyptian moon god. Throughout the Moon Knight, there are sparring sessions with other Egyptian gods, including Tawret and Ammit. “Moon Knight” is not the only Marvel Studios project related to the gods. In his interview with The Playlist, Slater told how he created these characters, and collaborated with Thor: Love and Thunder, whose main goal of the villain is to kill all the gods. “Marvel did a great job of giving us our own little corner and our own little space and said: “Well, the Egyptian gods can be something of their own,” especially since we see, I think, only three of them on the screen over the course of this story,” Slater said. “But we talked a lot with the producers of Thor: Love and Thunder, just to find out what they do with the gods in their story, to make sure we’re not going to contradict anything.”

Slater mentions that the Moon Knight team had to make some difficult decisions as the release dates of Marvel Studios projects changed. At the time, Slater wasn’t sure if Moon Knight would precede or follow Thor: Love and Thunder, and decided it would be safer to put some distance between the existence of the Gods of each project. While Moon Knight did not plan “Thor: Love and Thunder,” Slater does not rule out the possibility that Scandinavian, Greek, Roman and Egyptian gods may intersect in future Marvel Studios projects. “Marvel is constantly pushing the boundaries of the Marvel cinematic universe, it’s getting bigger and weirder, and it gives us a lot more opportunities to tell cool stories in the future,” Slater said.

Among the “Moon Knight” and “Thor: Love and Thunder” depicting the gods, the “Eternal” Chloe Zhao appears, consisting of a group of Celestials. The recent trailer for the movie “Thor: Love and Thunder” apparently included a tie-in to “The Eternals,” meaning these characters could also be on the hit list of Gorr, the butcher god. Slater also discussed some of Moon Knight’s less pious characters, including Arthur Sparrow Hawk, and whether he might return. Slater teased that because viewers don’t see the body and that everyone loved Hawke so much, Slater thinks Marvel Studios “keeps a few cards in their deck in case the circumstances ever get right.”

In his interview, Slater spoke about the relief that Isaac’s choice brought to many associated with “Moon Knight,” praising the ideas and ambivalence he brought to the role. As for the future Moon Knight, Slater said that “Oscar can do as much Moon Knight as he wants.” He went on to say that Isaac doesn’t seem to him like a person who runs in and “releases a sequel just because the first one was popular.” We hope that the answer about whether the story of the Moon Knight will continue in the future of the MCU will be available soon.

“Moon Knight” is now streaming on Disney Plus.