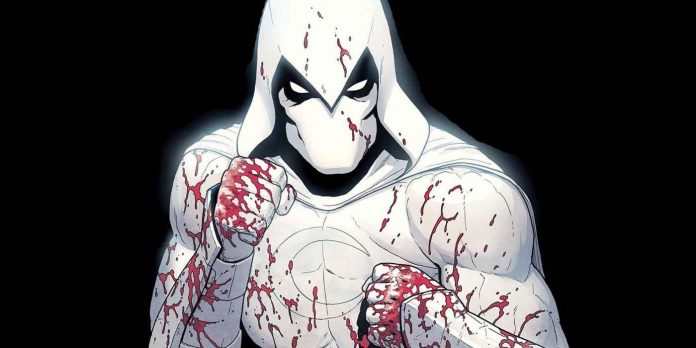 A new story has revealed the real reason why the Moon Knight always wears white. The traditional explanation for the Moon Knight’s choice of clothes was to tell the bad guys that he was coming, but in the story “The Knight of a Hard Day”, which appeared in “Moon Knight: Black, White and Blood # 2”, readers will learn that there is much more. the tragic reason he dresses in white. The issue is already being sold in print and digital form.

Comics built around a specific color scheme have gained popularity in both DC and Marvel over the past few years. These books feature stories that transcend continuity, giving creators carte blanche to roam with some of each publisher’s biggest characters; these anthologies also have unique color schemes, usually built around the color associated with that character. Marvel has given a “black-white-red” treatment to some of its bloodiest characters, such as Deadpool, Wolverine and Elektra.

Now it’s the Moon Knight’s turn, and David Pepos, Leonardo Romero and Chris Sotomayor present readers with a new vision of the Moon Knight, offering a fresh look at his all-white suit. The story begins with a Moon Knight dressed as Mr. Knight arriving at a late-night diner, beaten and bloodied. The waitress treats it like a normal thing, saying she left his stall open for him. Moon Knight sits down and is greeted by some of his characters: Mark Spector, the recently returned Moon Knight alternates, Stephen Grant and Jake Lockley. Each in turn tells stories about his exploits, revealing the legacy of violence and bloodshed associated with the fact that he is an avatar of Honshu. As the Moon Knight’s conversation continues in his head, he remembers the friends he lost, such as Marlene and Frenchy, the people who stood next to the Moon Knight and suffered as a result. The Moon Knight concludes that although he wears white to let the criminals know he is coming, he also wears it to remind himself of the blood on his hands. When his thoughts are interrupted by a crook trying to rob a diner, he rushes into battle, ready to administer violent justice.

The Moon Knight’s decision to wear an all-white suit as a vigilante working mostly in the dark is curious. Writer Warren Ellis offered the classic “so they can see me” explanation while working on the character, and it has stuck ever since; it perfectly matches the unpredictable nature of the Moon Knight and shows how confident he is in his abilities and how little he cares about his own safety. This confidence has led him to some epic victories, but it has also cost him dearly, and “Hard Day’s Knight” explores this idea, showing that the people closest to him pay the ultimate price; on his hands is not only the blood of numerous villains, but also the blood of those who loved him. This leads to the discovery that he is wearing white to see the blood, a grim reminder of everything he has lost. The creative team of the book uses the “black-white-red” color scheme to brutal effect in this story, reminding readers that the path the Moon Knight is following is dangerous. However, the Moon Knight’s terrifying reputation makes him a hero.

The Moon Knight’s decision to wear nothing but white is usually seen as a bold decision highlighting his violent and unpredictable nature, but there is a deeper and tragic reason why he wears white: so that he can see all the blood on his hand.