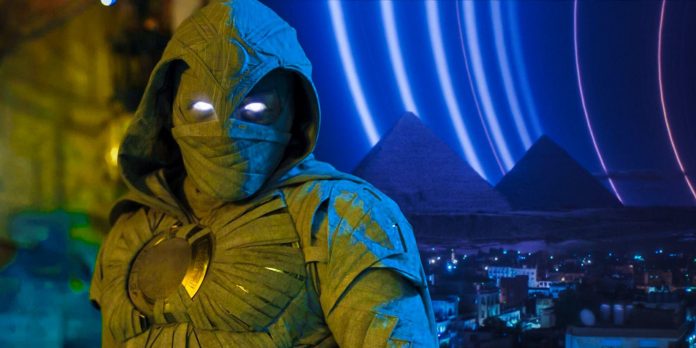 Moon Knight has cleverly hidden his position on the MCU timeline. “Moon Knight,” starring Oscar Isaac as the new MCU vigilante, was unlike any other Marvel Studios release to date. It was very self-contained, carefully avoiding explicit references to other events in the MCU. This meant that Moon Knight’s place on the MCU timeline was surprisingly unclear.

On first viewing, the only concrete evidence presented was in the background with an advertisement for the Global Repatriation Council, an international council created after the events of Avengers: Finale to overcome the crisis caused by half of the world’s population suddenly returning to life. . This led most to conclude that “Moon Knight” occurred after “The Falcon and the Winter Soldier”, where GRC played an important role, but surprisingly Disney+ placed the show much further down the timeline — meaning that its action was supposed to take place in 2025.

However, Geekritique’s fascinating analysis seems to put Moon Knight in the proper context. He notes that the exposition of Ancient Egypt shown in the first episode of “Moon Knight” runs from April 22 to July 29, which means that the show must take place somewhere in this time period. Ironically, he can then determine a more precise date by studying the phases of the moon shown throughout the Disney+ TV show. In each episode there was a different lunar phase, indicating the passage of time and ending with the final battle on the full moon — a confrontation that occurs when the Moon Knight’s forces are at their peak. It was a conscious choice on the part of the production team, as filming was even planned according to the lunar phases, and the credits confirm this by showing the correct phase each time. This means that the Moon Knight and his alternates are fighting a war in the lunar cycle. In some episodes, certain days of the week are marked — for example, in the first episode of Moon Knight, Stephen Grant is shocked to realize that he woke up on Thursday. But, unfortunately, there is no lunar cycle corresponding to the specified days of the week in 2025. However, they are ideally suited for the period from June 6 to June 16, 2024.

This may seem like over-thinking, but Geekritique quotes interviews in which the Moon Knight writers noted that they originally had a certain place for the show, and that in fact it can be found out by careful study. However, the explicit references were removed because the production team didn’t know exactly how the MCU timeline would develop—or even when “Moon Knight” would be released. The lack of explicit continuity references means Marvel Studios can place the Moon Knight anywhere in the timeline without worrying, because few viewers will worry too much if the moon cycle contradicts the future.

This, of course, means devaluing the MCU Disney+ timeline, but in truth, this particular timeline has always had some difficulties, and from time to time it has changed slightly in response to viewer complaints. The Disney+ MCU timeline is best viewed as a marketing tool, which explains why the latest MCU release always appears at the end of the timeline (with the exception of Black Widow, for obvious reasons). Indeed, Geekritique has already prepared an MCU timeline that makes more sense than Disney+, so it should probably be considered the best place for Moon Knight—at least until it is potentially changed.

The Big Bang Theory: The true relationship of these 2 actresses...

Did JYP Stole The MONSTA X Logo? Fans Point Out The...