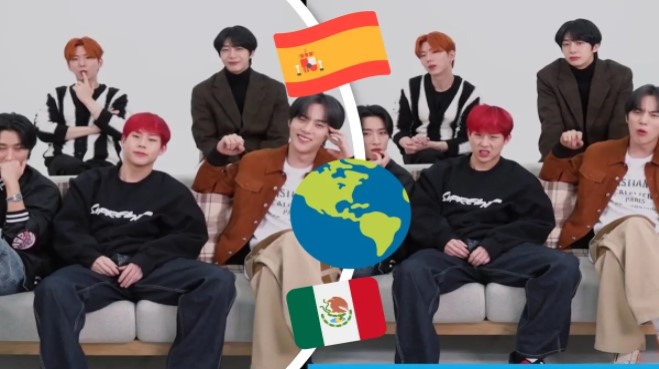 MONSTA X just wants to give the best to their fans and does not forget MONBEBE from Latin America, so they said many of the favorite phrases of their fandom in Spanish.

MONSTA X idols are promoting ‘The Dreaming’ their next album in English from which we could already hear their first song ‘One Day’, released last September that moved MONBEBE for this new album.

MX arrived in the United States because it has many surprises for its fans with ‘The Dreaming’, the first events of this next release will be in the country of North America, with a special Meet & Greet in Los Angeles and the boy band’s presentations in Jingle Ball.

But MONSTA X does not forget all its fans in Latin America, who have shown their love and support for the group for a long time, as they have always been well received in Spanish-speaking countries, streaming, going to their concerts and with projects. for each of your favorite idols.

So MX also surprised MONBEBE from Latin America by speaking Spanish, how is your pronunciation? MONSTA X delights us with the favorite sayings of its Spanish-speaking fans.

MONBEBE can discover secret MONSTA X content by using the Shazam app with their song ‘One Day’, thus fans discovered an exclusive and special video for Latin America, as idols say some typical Spanish sayings and phrases.

This video was made based on a Tweet that MONSTA X published, asking L-MONBEBE what they wanted to hear from them in Spanish, the fans wrote their best phrases and MX pronounced them amusingly.

Definitely, MONSTA X surprises us with their way of speaking in Spanish and they don’t forget MONBEBE from Latin America with these phrases, they also say a tongue twister so make One Day Shazam to see the whole video.

We will never forget the time that the YouTube channel hola82 put MONSTA X to speak in Spanish and epic words were born like ‘bishicleta’, ‘chavolita bayolía with me’ or ‘marashishoso’, LOL; MX idols speaking in our language heal our hearts from depression.

We hope that MONSTA X will return to Latam soon to be able to hear them speak in Spanish live and in full color, in addition to having all of his talents in our countries.

Cole Sprouse under Jennifer Aniston in the past!