Home Entertainment Monsta X Reveals The Songs Of No Limit, This Is Their Tracklist 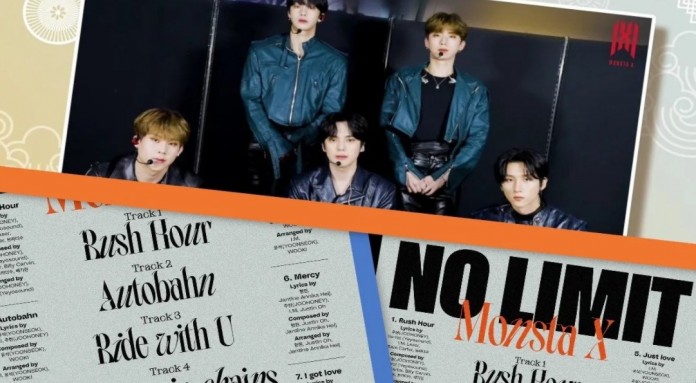 MONSTA X has revealed the tracklist for ‘No Limit’ their upcoming Korean mini album for which MONBEBE can’t wait any longer, what songs will this new album have?

MONSTA X’s work has not stopped and idols created a lot of new music for their fandom and released this end of the year, this boy band has many releases that we will have in this month of November and December; First, they will have their comeback in Korean with ‘No Limit’.

Later, the K-Pop group will premiere their first movie ‘The Dreaming, the movie’, in which we will live a concert with the best songs of MX, as well as interviews and more of what the band has lived during 6 years of career since its debut.

One day after the great premiere of their film, MONSTA X’s second album in English will see the light and they will enchant the world with ‘The Dreaming’, an album from which they have already released the single ‘One Day’; in December they will also start with face-to-face concerts at ‘Jingle Bell’, an event that will take place in the United States.

But let’s go back a bit to the beginning, because MX has already shown us the songs that ‘No Limit’ will have and the world is more than ready for this next release of the group.

MONSTA X REVEALS THE TRACKLIST NO LIMIT, THESE ARE THE SONGS THAT THEIR DISC WILL HAVE

MONSTA X’s ‘No Limit’ will feature 7 songs, most of them featuring Joohoney and I.M, rappers from the idol group; although they not only wrote the lyrics for their tracks, but also composed and produced their own songs.

‘Rush Hour’ could be the title track of ‘No Limit’ which will also feature songs like ‘Just Love’, ‘Mercy’ and ‘Autobahn’; MONBEBE theorizes that the concept will revolve around cars, races, or highways due to the different references in these songs.

There is less and less time for the premiere of ‘No Limit’, and MONBEBE has everything ready to listen to the new music of your favorite K-Pop group, this new mini album is already in pre-sale.

WHEN WILL MONSTA X RELEASE THEIR NEW DISC ‘NO LIMIT’?

MONSTA X’s ‘No Limit’ has a premiere date of November 19, so there are only days to listen to all the new MX music from producer Jooheon, the idols will not fail to show us all their power; even though Shownu is not in this comeback, as he is taking care of his duties as a South Korean citizen.

The K-Pop group has already launched its calendar of activities and very soon we will have concept photos, teasers and others that will generate great expectations for this great launch that MONBEBE will not miss.

Now just a couple more weeks and we will hear the great power of MONSTA X on a new album, we cannot wait any longer for the premiere of ‘No Limit’ and all the other releases that MX has prepared for the world.

The Lord Of The Rings: All The Promotional Posters Of The...