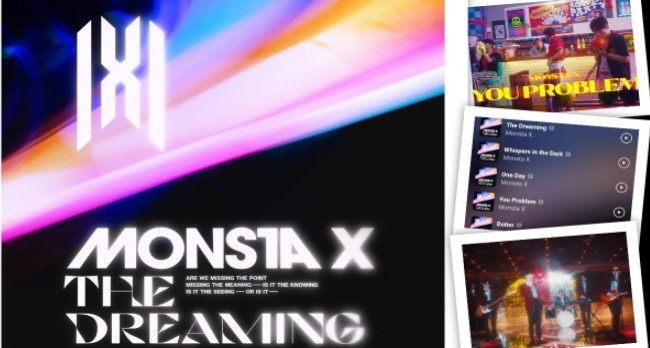 MONSTA X has released their second album entirely in English, with songs of various styles that show us the adaptability and versatility of the boy band.

MONSTA X‘s second English album ‘The Dreaming’ is now available for everyone to listen to the new songs that the K-Pop group prepared in a different language to test more of their idol talents.

Just over a year after the release of All About Luv, MX’s first fully English album, with which they had an imminent triumph outside of South Korea reaching # 5 on the Billboard 200, this boy band had everything ready. to try a new style again with a disc in the same language.

With ‘One Day’, MONSTA X had already shown us a bit of what ‘The Dreaming’ would be, the first song on the album that was released in December; Likewise, in the group’s new movie they showed us a little more of some of their songs.

But finally, the day came to listen to ‘The Dreaming’ in all its splendor and get to know each of the songs that make it up, letting us see a variety of styles, the great versatility of MONSTA X and more of the great skills of the members of this grouping.

MONSTA X’s ‘The Dreaming’ has a very different style to what the boy band is used to for their Korean releases, for this album they dare to try different musical genres, to get out of their comfort zone and show more than the capabilities of the members of this group.

‘Whispers In The Dark’, for example, shows us that all MONSTA X idols can be great vocalists, with a quiet pop base that does not overshadow the voices that star in this song.

Another of The Dreaming’s songs is ‘Tied To Your Body’ with a rhythm accompanied by an acoustic guitar that reveals another one of the musical styles within the album, with a rhythm that reminds us of flamenco in some parts and the voices unmatched of the members of the group.

The last song of The Dreaming bears the same name as the album and this is more of a calm ballad that fills us with nostalgia with its lyrics and lets us hear the sweetest voice of the members of MONSTA X, accompanied by a soft piano, they interpret this warm song that MONBEBE can’t stop loving.

For the premiere of ‘The Dreaming’, MONSTA X also released the official MV for ‘You Problem’, this song has some country and retro touches, with a fun and colorful music video that fills us with energy and joy.

This is how MONSTA X shines like nobody else with a new album in English that lets us see many different styles but always faithful to the great essence of the group, in addition to having all the talents of their idols embodied.

Michele Morrone suffered a lot before his operation!