Home Entertainment Mom Shared TikTok After Dragging Her Eldest Child to Disney with a... 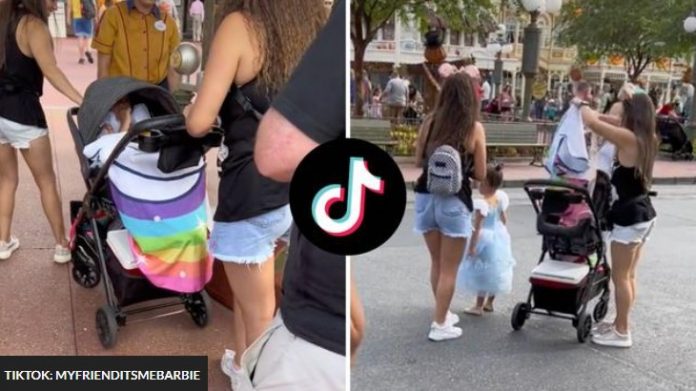 A mother divided viewers on TikTok after sneaking her eldest child into Disney World with a baby stroller.

In a viral video, a woman disguised her primary school-age child as an infant in order not to pay for admission to Disney World.

According to the Disney website, children under the age of three do not need a ticket, and children aged 10 and older are charged for adult tickets.

The video, which has garnered a whopping 8.6 million views, shows two women standing in line to buy tickets to the park with a baby stroller.

The stroller was covered with a blanket as one of the women scanned the ticket in front of Disney employees. After the scanner lit up with a green circle, two women were shown pushing a stroller suitable for babies past the workers, smiling back at them.

As soon as the group passed by the workers, the woman pulled the child in a Cinderella dress out of the stroller and threw the blanket back on the seat.

“Poor kid was in an infant car seat,” the caption to the video says.

TikTok users were divided about the viral video, although many commenters admitted that they used the same strategy.

“I fully support this because we went in May and it was literally like taking a second mortgage out on our house,” a third shared. “We just teach our kids to lie about their age but this is epic,” someone else admitted.

Others, however, were less than impressed.

“The way people have no shame just continues to amaze me,” one person added.

“No way. I even explain to my kids it’s wrong to get fountain drinks with a water cup. It’s the principle of it,” another stated.

All the rumors and leaks about Pokemon Scarlet and Violet so...