Home Science A Molecule That Can Prove Life In A Meteorite Coming From Mars... 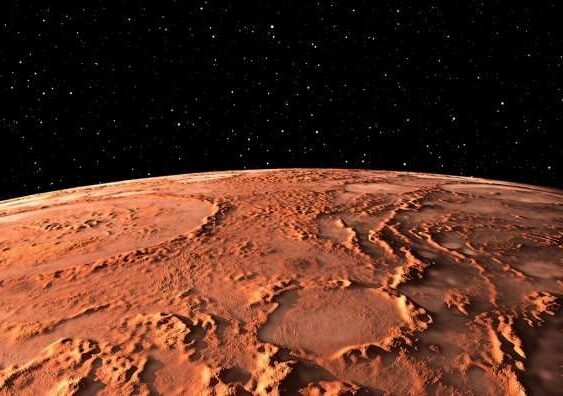 Mars, a giant desert now, may have been a life-supporting planet in the past. Scientists think that after the formation of the Red Planet may have lived for a while. For this reason, the presence of the nitrogen atom, which is the essential element for all known life forms, is sought on Mars.

Some of the researches to find evidence of living on Mars are being done on Earth. Meteors that come to Earth from Mars are being meticulously analyzed by scientists, as they may carry signs of organic matter on the Red Planet.

Chemist Atsuko Kobayashi, from the Tokyo Institute of Technology, says that in the early Solar System, Mars might have been exposed to organic matter, possibly by carbon-rich meteorites, comets and dust particles. Kobayashi notes that some of this organic matter may have been dissolved in salt water and remained in carbonates.

There may be a nitrogen cycle on Mars in ancient times
Although there are estimates of how nitrogen bearing organic substances may have appeared on Mars, no evidence has yet been obtained. Despite this, it is accepted by all scientists that Mars once lived like Earth. Evidence for organic matter also shows that there may have been a nitrogen cycle once on Mars.

Named as ALH84001, the scientists analyzed, the meteorite was disconnected from the surface by a meteorite that crashed to Mars 4 billion years ago, and ALH84001 was completely separated from Mars’ gravity by 16 million years ago.

The meteorite, which is thought to have fallen on Earth roughly 13,000 years ago, was discovered in 1984 by scientists in the Allan Hills of Antarctica. ALH84001 has remained a famous phenomenon in the world of science since its discovery.

Some of the scientists working on meteorite, which is about 4 billion years old, claimed that they found bacteria-like microbial fossils on the meteorite. However, later studies have revealed that what scientists think is a bacterial fossil is not biological material.

Organic molecules found on 4 billion year old meteorite
A new analysis of scientists from the Tokyo Institute of Technology on ALH84001 samples shows that there are traces of organic matter in the meteorite. Scientists discovered orange-colored carbonate materials that seemed to come from a salty liquid that may have been on Mars during their analysis.

Meteors from Mars provide important information about the history of the Red Planet. However, it is very difficult to find out how much of the clues on the meteorites were brought to Earth by the meteorite and how much of it originated from the Earth.

Terrestrial contamination, which is the process of separating substances on meteorites, has created a serious problem in the past, but new technologies have made this process reliable. Therefore, scientists think that nitrogen-containing substances they discovered on ALH84001 are most likely coming from Mars.

Scientists also studied examples of igneous rocks around the meteorite to come to this conclusion. The lack of nitrogen in the rock samples, suggests scientists that organic molecules originate from meteorite carbonate.

Organic molecules, trapped in meteorite for about 4 billion years and preserved in space, show how long the possible evidence for life can sometimes survive given the right opportunities.

While NASA’s Curiosity tool detects nitrogen in some organic compounds on Mars, all these techniques applied by scientists are being tried to be applied millions of kilometers away. However, verifying the analysis seems quite difficult at this stage.

While Curiosity continues to search for the sources of life on Mars, studies on meteorites on Earth can provide alternatives to evidence of life that may have existed on Mars in the past. These alternative evidence could allow scientists to reveal the history of Mars without going to the Red Planet in a long time.