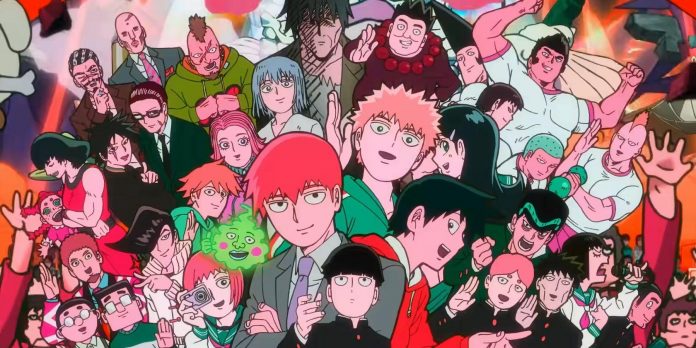 Crunchryoll Expo, the streaming platform’s annual event, took place on the weekend of August 6th. One of the main discoveries of Crunchyroll Expo was the world premiere of the first episode of Mob Psycho 100 III, which will be released on October 5.

The official Mob Psycho 100 anime channel on YouTube later introduced an exciting opening theme of the third season called “1” performed by Mob Choir, the group responsible for the first two openings. It seems that thematically it follows from the previous debuts, “99” and “99.9”. The opening sequence includes smooth, colorful and psychedelic visuals characteristic of the series, escalating riffs, powerful drums and inspiring lyrical content.

It also turned out that Mob Choir will also perform the final part of the series, a song called “Cobalt”. As previously announced, the staff of the first and second seasons will return for the third season, and director Yuzuru Tachikawa will move to the position of executive director, and the director’s chair will be taken by Takahiro Hasui, who worked as an episode director at Mob. Psycho 100 II.

“Mob Psycho 100” tells about the life of Shigeo “Mob” Kageyama, a modest high school student whose ordinary appearance hides something incredibly special: he is an incredibly powerful esper. Due to the unpredictability of his abilities, Mob has learned the art of emotional suppression in order to control his psychic perception; however, he can not withstand much, and as soon as his emotional stress level reaches 100%, something incredible happens. “Mob Psycho 100” tells the audience about the Mob’s journey to understanding their own emotions, learning self-expression and overcoming the crazy events of the surrounding world.

Mob Psycho 100 was created by ONE, the widely known author of One Punch Man. It was first distributed as a webcomic on the Ura Sunday website from 2012 to 2017 and consists of 16 volumes. The first season of Mob Psycho 100 was released in 2016, and the second season followed in 2019.

The third season should continue the trend of the series to adapt new elements of the story for the release of anime every three years since the creation of the anime. The official release date of Mob Psycho 100 III is set for October 5, and the series will be broadcast simultaneously on Crunchyroll. The events add to the anticipation of an incredibly busy fall season, which may turn out to be one of the best seasons for anime in a very long time.

The Elder Scrolls Can Benefit From Its Own Fallout: New Vegas

Marvel’s Guardians of the Galaxy Reaches Switch Via Cloud