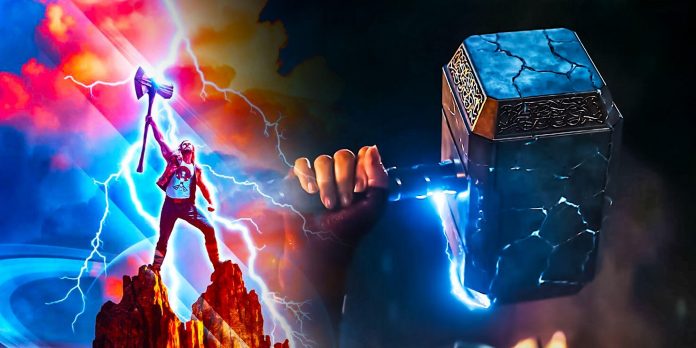 The famous weapon of Thor Mjolnir will return to the MCU in the movie “Thor: Love and Thunder”, and perhaps it can provide answers to some of the mysteries of the multiverse. Phase 4 of the MCU has so far been largely focused on the multiverse, but it wasn’t known that the upcoming sequel to Thor would be part of that focus. Now, given the re-introduction of the titular Avenger’s magic hammer, the inclusion of Thor Love and Thunder in this chapter of the franchise seems potentially more important than anyone initially thought.

In the MCU, it has been shown that Mjolnir has many powerful properties. The most unique of them shown to date is the enchantment that Odin bestowed on him in the first Thor film, allowing only those who were deemed worthy to own Mjolnir and receive the powers of the thunder god. This spell, depicted in the MCU, is used in conjunction with the version of Mjolnir from Marvel comics, and there are several new properties that Mjolnir possesses in the current issue of the Avengers Forever comic, which can be transferred to the movies in a similar way. And one of these abilities, in particular, would easily and firmly bind “Thor: Love and Thunder” to the multiverse.

In Avengers Forever #4, it is shown that Mjolnir can communicate with other versions of the hammer throughout the multiverse. Having established a connection, the Granddaughters of King Thor travel through the multiverse, and Mjolnir accompanies them and guides them to get to Earth-818, the world of another version of the weapon. The reason why Mjolnir is taking his Granddaughters to Earth-818 is that this world needs help. The reconstructed Mjolnir MCU, which will be in the hands of Jane Foster’s Mighty Thor in Thor: Love and Thunder, may develop the same property as a direct result of the multiverse interaction that the heroes have encountered so far in the franchise. And if Mjolnir demonstrates the power of this ability, which his comic book counterparts possess, the hammer can become a solution for navigating the multiverse.

Navigating the MCU multiverse will be very dangerous. Most of the franchise’s heroes, who do not have abilities or access to other means of moving to alternate dimensions, will not be able to travel through the multiverse without assistance. The properties possessed by the analogues of Mjolnir from the comics will make it safer for MCU heroes to travel to the multiverse. If the multiverse does not directly affect the main events of “Thor: Love and Thunder”, the scene after the credits may be the next step in Thor and Jane Foster’s journey through the Mighty Thor, establishing new possibilities of Mjolnir. The ultimate reward may be the Mighty Thor Thor and Jane Foster using Mjolnir to guide other MCU heroes on multiverse journeys to worlds that need help. It would also eliminate one of the biggest problems of the MCU multiverse.

It is no coincidence that Marvel Studios planned to release “Thor: Love and Thunder” in the middle of the arch of the MCU multiverse. With each part of Phase 4 of the MCU, there is a further development of the multiverse storyline, and Thor’s fourth single exit will definitely have something to add to this theme. Now it seems likely that the return of the once-destroyed Mjolnir to the MCU will be the tool by which the film will find a connection with the rest of the current phase of the franchise.

Xbox Game Pass Will Add Games Like Mortal Kombat 11 Or...