Home Entertainment Miss Marvel: Who are the fates of the clan? 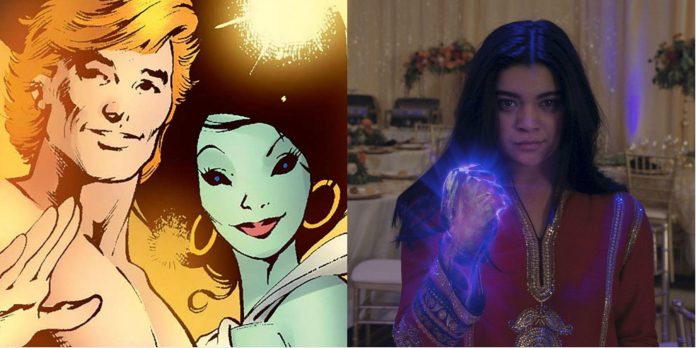 The following contains spoilers for Ms. Marvel Episode 3, “Destined.”When the Ms. Marvel trailers revealed that Kamala Khan’s power set would be different from the comics, they were surprised at the change. Less surprising was the decision to not make her a NuHuman – a human descendant of Inhumans on Earth who manifests powers. After all, Inhumans hadn’t been a successful TV series, and the race of super-powered beings doesn’t have a large presence in the Marvel Cinematic Universe. Just because the Inhumans aren’t a part of Kamala’s MCU journey, however, doesn’t mean she’s disconnected from comic book backstory.

The Ms. Marvel TV writers decided to offer a deep cut for comic book fans that combined real-world mythology with that of a comic book family. Kamala Khan discovers in Episode 3 that she is descended from a member of the Clan Destine, or the Clandestined. In the context of the show, the group are said to be Djinn from the Noor Dimension. While that isn’t the same as the comics, the comic book history is still fascinating.

In the real world, Djinn are rooted in Islamic mythology and the basis for stories about genies in other cultures. As Kamala points out in the series, they are the subjects of stories that scared her more than ghost stories. Her brother even jokes about her still being scared of them before he turns out her light in Episode 2. The myths say that Djinn are invisible unless they want to be seen, that they are incredibly powerful, and that they can grant wishes – for a price. In the comics, the Djinn are a race of magical beings who can also grant wishes.

They’re descended from Lilith, in some stories, the first fallen angel, and in others, the wife of Lucifer or Adam, depending on the Christian stories the Marvel Comics draw from. She’s considered the first demon in Marvel Comics, and Lilith’s offspring all tend to be magical. The Djinn live in the ancient days of civilization, but because of their ability to grant wishes, they are captured and held prisoner by powerful rulers. That’s exactly what happens to Elalyth, the matriarch of the Clan Destine, and one of the last living Djinn on Earth in modern comics.

The Beginning Of Clan Destine

Elalyth crosses paths with a young man named Adam of Ravenscroft when she saves his life in the 12th century. She takes an interest in him and grants him protection of sorts. That protection saves his life in many battles during the Crusades, and his fellow soldiers take to calling him Adam of Destine instead of Adam of Ravenscroft. The new title would eventually become the name of his family. When Adam is tricked into stealing a gem from a warlord and sorcerer as an adult, the gem actually houses Elalyth, and the two are reunited when he destroys it to prevent anyone from using the gem’s power.

Elalyth grants Adam immortality, they fall in love, and they marry. Over the course of several centuries, the duo had at least 14 children. Much like Kamala in Ms. Marvel, their extended family is incredibly important to them. Both immortal, they never age, but their children do. Of course, all of their children also have a variety of magical abilities as a result of their Djinn heritage.

Their eldest daughter, Jasmine, for example, is able to place her consciousness in new bodies. Born in 1209, she manages to survive into the modern day despite not being immortal like her parents, by moving to a new body every few years. Gracie has psychic abilities, Albert is a healer, and Maurice could create energy blasts with his hands. Each child in the Destine line has their own unique ability, and they live longer lives than the average human, so they have to move on to new places and take on new personas as they do to prevent people from realizing just how long they’ve been alive. Some of the children even become superheroes, and some cross paths with the X-Men.

Created by Alan Davis, and first appearing in Marvel Comics in 1994, the members of Clan Destine aren’t one of the more prolific magical families. Their appearances have been sporadic since their initial series, and though they are (mostly) still living in the comics, they aren’t particularly well known by comic book readers, making them a good choice to adapt on screen.

The Clan Destine In Ms. Marvel

By making Kamala a descendant of the Clan Destine for Ms. Marvel, it does drastically change her comic book lineage, but it links it to Islamic mythology instead of a fictional alien race like the Kree or the Inhumans. While the series uses the same name, there is no indication that the stories will be any closer to one another than the members being Djinn and super-powered.

Even within the series, Kamran’s mother Najma notes that she and her fellow Djinn cannot manipulate the energy of the Noor Dimension because they are far from home. She theorizes that Kamala can only because she’s born in the dimension where they’ve been stranded. The alternate dimension makes for a big change from the story of the Clan Destine, but fits neatly into the exploration of the multiverse that has begun in the MCU. The changes to both Kamala’s backstory and the backstory of the Clan Destine make perfect sense.

It will certainly be interesting to see if Ms. Marvel, or the wider MCU, continues to pull from the Clan Destine stories of the comics, or if Kamala is linked to them in name only.

Ms. Marvel is currently streaming on Disney Plus.

Get Civilization VI And 20 Other Games In The Saga For...