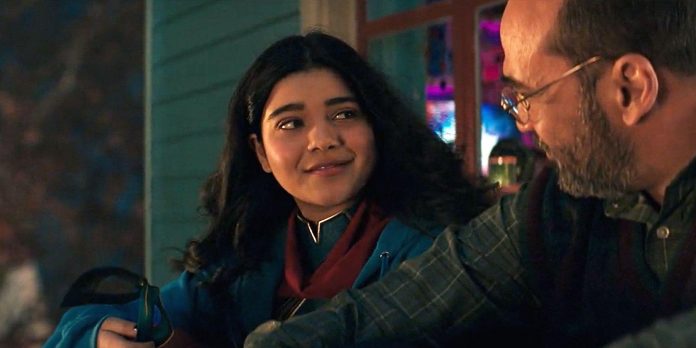 In its six-week run, Ms. Marvel brought fans of the Marvel Cinematic Universe closer with discussions, theories, and predictions for the future. The series introduced the first female South Asian and Muslim hero into the MCU, and added a dose of freshness with an entirely new star cast, most of which consisted of South Asian actors. From the get go, the Disney Plus show promised to be different, and it lived up to its word while providing fans with many memorable moments.

At its core, Ms. Marvel is a coming of age story about a teenage girl named Kamala Khan, who lives in New Jersey and discovers that she has superpowers. She then goes on a journey to learn about her family heritage and history, and practices to master those powers. The attention given to her culture and religion set her apart from other heroes in the MCU. Some moments reflecting those aspects of her life stood out in the series, and Marvel Studios did not shy away from social commentary within its dialogues.

Since its premiere, Ms. Marvel placed a lot of importance on Kamala’s familial relationships. Her parents, brother, and friends are a big part of her life, as is her religion and relationship with the community. But, she is still a teenager at the end of the day, and having some rebellious fun seems like a normal thing to do. In Kamala’s case, however, rebelling means attending AvengerCon, a convention dedicated to the Avengers. Overall, the series had some great moments that will be remembered by fans for a long time. The following are just some of the best ones.

The Hilarious Nod To Hulk

In Episode 1 of Ms. Marvel, Kamala asks her parents for permission to attend AvengerCon. Yusuf and Muneeba are shown to be strict parents, who are quite protective of their only daughter. Therefore, the only way she can attend this convention is if she goes with her father, and the duo dress as “big Hulk, and little Hulk.”

It was a hilarious moment, with the parents enjoying the little show they put on, and Kamala cringing at the very thought of showing up to a popular convention dressed in a “shalwaar kameez.”

The fictional convention was very well-designed, with a lot of thought put into the sets, extras dressed as the Avengers, and the atmosphere of the entire event. The sequence was loaded with Easter eggs, with the studio revealing an entire list once the episode had premiered. From Avenger-themed merchandise and memorabilia to direct references to other MCU projects, AvengerCon is every MCU fan’s dream come true.

The most obvious Easster egg is the fact that the event is held at Camp Lehigh, which is the same location that Steve Rogers took the Super Soldier Serum. AvengerCon is also where Kamala first discovers that she has powers, and saves Zoe Zimmer after she is unable to control the cosmic rays beaming out of her hands.

It was important for Ms. Marvel to acknowledge Kamala’s cultural roots, similar to the comics. But the studio went a step further and used real-life events to shape Kamala’s future. In Episode 2 of Ms. Marvel, the Khan family sits around the dinner table, making casual jokes, when Kamala’s sister-in-law and Aamir’s wife Tyesha asks about their family’s background.

This is when Yusuf refers to the 1947 partition of India, which is a political topic, one that fans did not expect to see being discussed in an MCU project. Not only is the conversation politically accurate, but also extremely relatable for many South Asian families around the world.

Projects in Hollywood often showcase Christmas markets, where families are seen buying gifts, drinking hot cocoa, and enjoying the spirit of the holiday. To see an Eid celebration in Ms. Marvel was a unique experience. Muslims around the world celebrate Eid twice in a calendar year. One is Eid ul Fitr, which marks the end of the month of Ramadan. Muslims fast from dawn to dusk for a month in order to renew focus on their spiritual life and remember those who are less fortunate, and celebrate Eid at the end with family and friends. Eid ul Adha, on the other hand, is the festival of sacrifice.

The Eid market that features in Ms. Marvel is a fun representation of the joyous atmosphere experienced during the festival, and is an accurate portrayal of the markets in real life. Also, watching Nakia Bahadir break down the various cliques at the celebration was hilarious.

Throughout Ms. Marvel, there were hints of Kamala’s superhero costume being developed piece-by-piece. It was a sweet touch to have her suit be inspired by gifts that were given to her by family and friends.

Her mask was made by best friend Bruno Lintz; the red sash comes from Red Dagger; the blue vest was a gift from Waleed, the leader of the Red Dagger clan; and finally, the lightning bolt logo was from Kamala’s broken necklace, which read her name in Arabic. The best part was that it looked like the letter K in the Arabic language, which happens to be the first letter in Kamala’s name.

In the Ms. Marvel finale, Zoe uses the power of social media to gather the community against the DODC. When her followers discover that teenage children are being hunted by a government organization, they rally to the scene of action and stand together in solidarity. The scene is powerful in two ways. First, it shows how people are willing to come together for the sake of the children in their community. They stand together, forming a literal wall between Kamala and the DODC personnel with weapons, to defend her. Not only is she the hero who just saved their lives, but she is someone they have seen grow up within their community.

Second, Zoe talks about how the DODC wants to arrest Kamala and Kamran because “they’re different.” While she refers to their powers, it is also a comment on both characters’ cultural backgrounds. There has been an issue of racial profiling by some law enforcement personnel in the real world, and the community coming together in Ms. Marvel to defend the two characters is a testament of people truly putting their differences aside in such a scenario.

Ms. Marvel is streaming on Disney Plus.

Young Sheldon: The Prequel Just Destroyed Its Connection To The Big...