Home Entertainment Miss Marvel: The 10 best relationships from the series 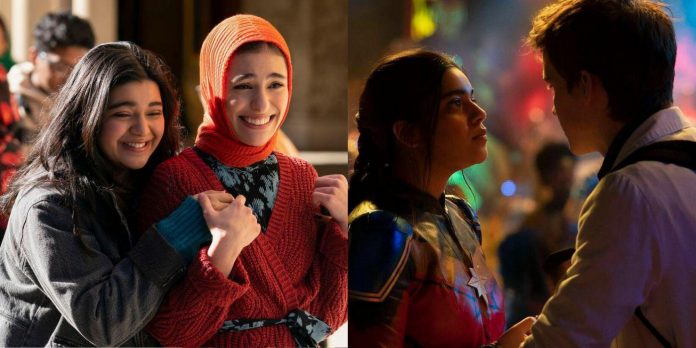 The ongoing Disney+ series Ms. Marvel is centered on Kamala Khan’s experiences after finding a mysterious bangle that has unlocked her unique abilities. Her connections with her friends, family, and newcomers all affect how she navigates her journey to becoming a superhero.

From Aisha and Najma’s enigmatic link to Bruno and Kamala’s close bond, there’s no shortage of important relationships between the show’s well-written characters. As fans wait to see what’s next for the inspiring protagonist, it’s the perfect time to examine how these relationships have been depicted in the series so far.

Although she hasn’t appeared in the series outside of flashbacks, it’s clear that Kamala’s great grandmother Aisha has an important role to play in her future. An important scene shows her and the other Clandestines, including Najma, finding one bangle that’s crucial to getting them home to the Noor Dimension.

In the present, Najma is the main villain who’s determined to use Kamala’s abilities for her group. Najma seemed close with Aisha during their time hunting for the bangles, but something may have soured their relationship considering the way people talk about Aisha today.

Aamir and Tyesha’s relationship has little to do with the mysterious bangles or Kamala’s power, which is part of why it’s so appealing. Their wholesome romance is entertaining to watch, especially when it’s on full display during their grand wedding.

The two of them are so obviously in love with each other, with every scene featuring them just further proving that they’re the perfect match. Their arc may not contribute much to Kamala’s personal story, but there’s no denying that it’s a welcome addition to the series.

Cleary and Sadie serve as the persistent representatives from the Department of Damage Control. They’re convinced that Kamala is up to no good, even thought they still can’t figure out who she is. The two of them share the same view and work together in a misguided attempt to stop her.

They’ve quickly become some of the most irritating characters from the series, as nothing ever good comes from their presence. The minor antagonists have yet to reveal what they will do to Kamala if they ever manage to catch her, which their incompetence has thankfully been preventing so far.

The close friendship that Nakia and Kamala have is so important for both of their lives. Whether it’s helping each other cope with bullies at school or discussing the reforms needed at their mosque, they always manage to make each day better or at least more bearable for each other.

What’s more, Nakia is incredibly smart, and can teach Kamala a thing or two about standing up for herself. Their relationship is at risk following Nakia’s discovery of Kamala’s secret identity, which has obviously caused Nakia to feel betrayed and hurt.

One of the biggest surprises of the series so far has been Kamran’s revelation that the woman in Kamala’s visions is actually his mom, Najma. Following the shocking cliffhanger in his car, Najma explains that they are a group known as the Clandestine who were exiled from the Noor Dimension.

While their mother-and-son relationship hasn’t been explored as much as Kamala and Muneeba’s, it’s easy to see that there’s something quite wrong about the way Najma directs his son to manipulate Kamala. Plus, a tense scene before the Djinns’ fight with Kamala shows Najma coldly warning his son not to get in his way, further emphasizing the mistreatment he experiences.

He may be a goofball, but that’s exactly why Aamir is a likable character who often serves as a source of comfort for Kamala in their home. This is especially true after an argument with her parents about Avengercon, which Aamir immediately recognizes as something that’s important to his sibling.

As her older brother, Aamir gets much more freedom compared to the teenager, which can cause some tension every now and then. The love between them certainly outweighs the negative aspects of their relationship and it’s always nice to see the brother and sister bond.

Muneeba and Yusuf have been through a lot together, as moving to America was a huge challenge for the couple. Muneeba recounts how Yusuf had to work long hours for very little pay in one conversation with Kamala, but they both did what they had to do to build a good life for themselves and their children.

They may not always see eye to eye, but Muneeba and Yusuf clearly still love each other. Their spontaneous dances in the kitchen and other small acts underscore the strength of their marriage.

A relationship that has been prominently featured on the show is Kamala and Muneeba’s complicated mother-and-daughter bond. While Muneeba certainly loves and cares for her daughter, Kamala wants things that her mother just can’t or won’t understand.

Their differences have caused conflicts between them, especially as its becoming apparent that Kamala is keeping a big secret from her mother. This is why it’s even more admirable that Muneeba has been so patient and even gives Kamala advice about how she can go up against the world at one point.

It’s always fun to watch Kamala and Kamran’s budding romance, as the two of them relate with each other’s experiences and even connect through pop culture references about Bollywood and various bands. Their relationship has developed from Kamala’s crush into something totally unique, thanks to that secret Kamran has been keeping about his mom and the Clandestines.

There’s no telling what will happen to their love story after that stressful attack by the Djinn, as Kamran will have to pick a side. It’s looking like he will risk his connection with the Djinn to protect Kamala, but only time will tell.

Bruno and Kamala have been best friends for the longest time. They know each other extremely well, but even that hasn’t helped Kamala see that Bruno has a massive crush on her. That hasn’t interfered in any way, though, as he readily helps her navigate her newfound abilities despite feeling jealous about Kamran.

It’s safe to say that Kamala doesn’t appreciate Bruno enough, as the reliable friend has helped her so many times during her messy experiences with the bangle. Despite having no special abilities, he attempts to fend off the Djinn to defend her and gets hurt in the process. He’s the kind of friend anyone would want to have.