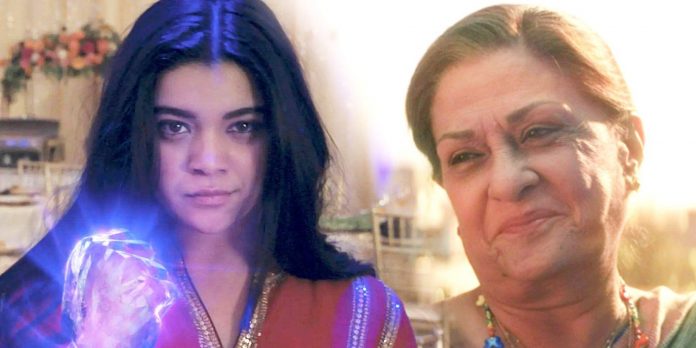 Warning: This article contains spoilers for episodes “Miss Marvel” from 1 to 4.

The co—author of “Miss Marvel” said that the name of Kamala Khan’s grandmother is a very cute Easter egg. Both the character and the Marvel comics series instantly gained popularity with both critics and fans, which contributed to Kamala’s appearance in various Marvel visual media. Now in the latest MCU Disney+ TV series, Iman Vellani plays Miss Marvel, a super-admirer of Captain Marvel, who, thanks to a mysterious bracelet sent to her by her grandmother, is endowed with cosmic powers. As with the character’s initial comic book release, “Miss Marvel” received almost universal critical acclaim from its viewers, making it the highest-rated MCU entry on Rotten Tomatoes.

In episode 4 of Miss Marvel, Kamala and her mother Muniba Khan (Zenobia Shroff) traveled to Karachi, Pakistan, at the request of Kamala’s grandmother, Sana (Samina Ahmad). In episode 3, both Kamala and Sana experienced the same vision of a train after being attacked by a group of interdimensional beings known as ClanDestines. Sana was introduced only by video call before the 4th episode of “Miss Marvel”, and Sana hopes that Kamala’s return to her ancestral home in Pakistan will help her uncover the secrets of her past and the secret of the powerful bracelet.

By topic: What is Miss Marvel’s bracelet? Powers and explanation of origin

In a recent interview with EW, Sana Amanat said that the name of Kamala’s grandmother is a very cute Easter egg. Although the character was not originally named in the comics, the creator of Miss Marvel shared that the writers of the Disney + show named Sanu after her. Read below what Amanat said about the touching gesture.

“By the way, I didn’t name the character San, it was done by cute screenwriters. It was a very nice tribute to me before I joined the project. I’m like, “Guys, my name is everywhere. t… “But it was just really nice.”

Since Kamala’s grandmother is referred to simply as Naani in the comics, a word meaning grandmother, the introduction of the character in live action allowed the writers to name a famous Marvel comics character in the MCU. Giving her the name of one of Kamala Khan’s co—authors is a heartfelt way to thank one of the writers who helped come up with a popular new addition to the pantheon of young Marvel heroes. The other original creators of Miss Marvel also received their own Easter egg in episode 1 of Miss Marvel, where a plaque attached to the wall of Kamala High School listed the names of the first artists and editor of Miss Marvel, as well as the writer and co-author, G. Willow Wilson.

The vast Marvel superhero franchise is filled with Easter eggs, references, tributes and reviews. Some of them are quite obvious, for example, actor Lou Ferrigno from the original 1970s TV series, who appeared in a short cameo role in The Incredible Hulk. Others, however, can be quite obscure, such as Valkyrie’s Scrapper number 142 in Thor: Ragnorak, referring to her initial appearance in Incredible Hulk #142. However, there are not many Easter eggs as touching and personal as the screenwriters of “Miss Marvel”, who named Kamala’s grandmother after Amanat, and the writer/the creator clearly considers this homage very special.

“Spider-Man: The original plan for the multiverse Way Home would not...

Rosario Dawson says “I love you” to writer Nnamdi Okafor —...