Home Entertainment Miss Marvel has already teased the answer to the mystery of her... 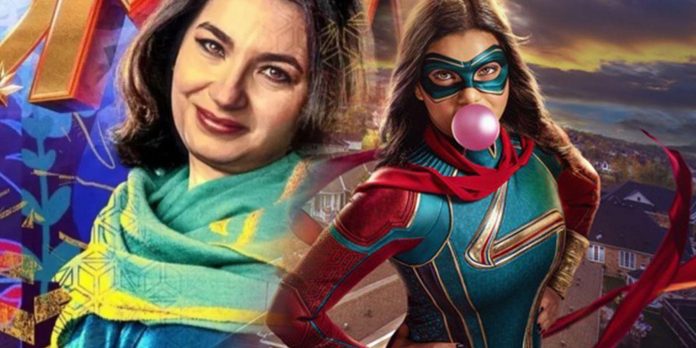 Warning: Contains SPOILERS for Miss Marvel.
Viewers have been wondering where Kamala Khan’s costume in “Miss Marvel” came from, but now they may have an answer. Since charismatic Kamala was introduced in episode 1 of Miss Marvel, she went on a journey around the world discovering her family’s legacy while dealing with new and exciting superpowers. However, viewers have yet to see Kamala in her infamous zip-up costume as Miss Marvel.
Throughout Miss Marvel, Kamala Khan has been discovering her new hard light abilities after discovering a mysterious bracelet that belonged to her great-grandmother Aisha, who turned out to be a genie from the Nur dimension. Dealing with her new status as one of the superheroes she idolized, Kamala revealed the secrets of her family history both in the US and after a trip to Pakistan. Along the way, viewers saw Kamala collecting various items that tease the final creation of her costume, which viewers have already seen in promotional materials for “Miss Marvel”, including Aisha’s bracelet, Kamala’s branded converse, a mask courtesy of Bruno, a red dress. , a blue vest donated by Walid, the leader of the Red Daggers, a scarf from Karim and, finally, Kamala’s necklace, which was once written with her name in Arabic, now takes the form of a zipper after the break.
Related: MCU Ignores Huge Mistake of Original Captain Marvel Costume
Kamala hasn’t put on a costume yet, but one joke in episode 1 of “Miss Marvel” suggests that the creator of the costume has been under her nose all this time. Episode 5 “Miss Marvel” “Over and Over Again” finally reveals Kamala’s secret identity to her mother Muniba and grandmother Sana. In episode 1, once Kamala convinced her parents to let her go to Avengercon, Muniba sewed suitable Hulk costumes for Kamala and her father, who were met with disdain by the teenager, but while this scene may have made some cringe, she proved Muniba’s amazing costume design skills, perhaps suggesting that she can be the one who designed Kamala’s own superhero costume.
Kamala’s mom making her a Miss Marvel Costume would Be Perfect
If Kamala’s mother had designed her daughter’s costume from items collected in Miss Marvel, it would have been the perfect moment for a full circle. In the first half of the series, Muniba could not understand Kamala’s dreams, but if she created the infamous Miss Marvel costume, it would be proof that she accepts her daughter for who she is and who she aspires to be. Not only that, but it will also give Muniba a chance to redeem himself after creating embarrassing Hulk costumes in the 1st episode of “Miss Marvel”, this time by assembling a costume that Kamala will like.
Kamala’s collection of trinkets in Miss Marvel, which will one day become elements of her costume, makes the superhero experience even more personal for a teenager. Each part of the costume represents a part of Kamala’s personality, giving her a unique touch of the superhero’s origin story. Muniba, connecting each of these parts in a costume that completes the image of the superhero Kamala, will be the final piece of this puzzle.
Since one episode of “Miss Marvel” is due to be released on July 13, viewers will definitely see Kamala Khan don a costume and adopt the nickname “Miss Marvel”. Both Kamala and the rest of her family are due to appear in the upcoming Miracles in 2023, suggesting that Kamala’s new identity as a superhero will only bring her family closer together. The latest episode of “Miss Marvel” is supposed to put Kamala first in the battle against the Department of Damage Control, complete with family support and a costume.

Sherlock Holmes Chapter One Already Has A Release Date: It Has...