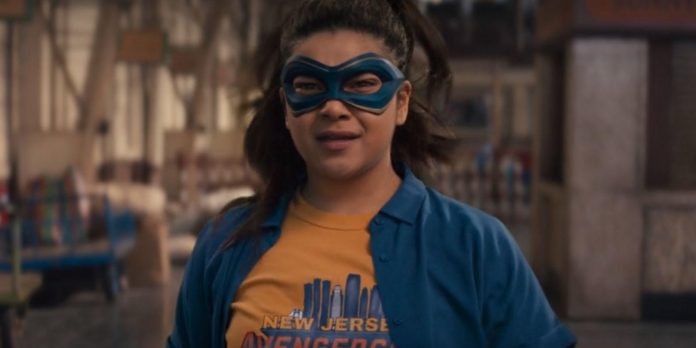 Now four episodes into its first (only?) season, Ms. Marvel has established a pattern. For better or worse, the popular Disney Plus show is better when it focuses on everything but a young girl who has superpowers. Instead, when the series focuses on a young girl who is learning more about her family and her culture, it is a fantastic show. These kinds of series, that are trying to teach the audience as it is teaching the main character can come off as stale and preachy. One of the best things about Ms. Marvel is that it never feels that way. Instead, it feels like the curtain is being pulled back for Kamala and her viewers.

It certainly helps that the sense of humor in Ms. Marvel is always quite sharp. And of course, it helps that even when the show is exploring topics like the relationships between mothers and daughters, it does it in a way where it isn’t trying to say one person is right over another. Instead, the warmth and humor allow people to see that there are two sides to every argument and that there might be reasons why someone is reacting one way or another.

This is especially important at the beginning of this episode of Ms. Marvel when it becomes apparent that despite the fact that Kamala and her mother are traveling to Karachi together, there is still quite a bit of tension between the two. The show once again seems to nail exactly how to handle this, while giving a hat tip to the fact that no one wants to see the pair spending much time at all arguing or being passive-aggressive to one another. A man who is sitting between the two on the plane over is a stand-in for the entire audience as he first makes pleasant conversation before realizing that he doesn’t actually want to be in the situation he finds himself.

The rest of the first part of the episode shows Kamala Khan learning a bit more about where her mother and the rest of her family came from and learning about this branch of Pakistani culture in general. It also appears that the showrunners know an American audience is going to have a preconceived notion about what Karachi will be, so it kicks off the visit to the foreign land by having Kamala and her mother stay in what looks like a mansion and then visiting a high-end boat club for lunch. From there the show also demonstrates quite aptly how life is indeed different from what people from the United States might be used to. When one character talks about stopping by the mall, it turns out to be different from the picture that might have immediately popped up in the viewer’s head.

Granted, because this is an MCU series, there are always going to be some superhero antics along the way, but Ms. Marvel really would be better served to either find better villains, or ignore them entirely. The Clan Destine continues to easily be the worst aspect of the show and just seem to be there only to push the plot forward when someone at Marvel decided that there weren’t enough super-powered fight scenes. In fact, the travelers from another dimension continue to be more annoying than intimidating mainly because they just seem mean for the sake of meanness and inept to boot.

There was a time when the Clan Destine looked like they could have been a formidable group of super villains, but that was left in the past when it became clear that Ms. Marvel wasn’t really going to spend any time with them. There is a bit more filling in on just what they are and why they are doing what they’re doing but despite the fact that the world is apparently in danger, there doesn’t appear to be any real rush or feeling of impending doom. That’s in large part because the bad guys just don’t seem all that bad.

It also doesn’t help that the Red Daggers, who apparently exist almost entirely to stop the Clan Destine are also not really filled out all that well. While it’s possible there will be more of a backstory for both of these forces in the next two episodes, at the moment, there just isn’t a reason to care all that much about either group. That’s laid out pretty well considering one of the main characters on the Red Daggers is so forgettable and disposable that if his name is ever spoken, it’s only done so once.

Likewise, the Red Daggers are loosely explained as enemies of the Clan Destine, but not why or how they became enemies. Why does this group know about people who have come here from another dimension? How do they know what the evil plan is? These questions weren’t asked in Ms. Marvel and so they weren’t answered. They should have been, if the writers really wanted the audience to care about this particular part of the story.

Of course, it’s entirely possible the writers don’t really care if the audience cares about these villains. There is a very good story being told in Ms. Marvel that has nothing to do with fighting baddies from another world. In fact, the case could be made that Ms. Marvel itself understands that audiences have grown tired of the idea that every villain in every Marvel story is here to destroy the world.

Ms. Marvel‘s real draw, its real attraction, is two-fold and this episode underlined that again. The first is, of course, the focus on Kamala’s family both in America and in Pakistan. The other is what happened to her family’s culture during the Partition. It appears the show is going to examine this from a first-person viewpoint in the coming weeks. That’s a good sign for the rest of the season as it appears the baddies are going to be left in the past (which is also the present) so viewers can learn more about what’s important.

Vinnie Jones Wants His Wife Back in Bulletproof Trailer [EXCLUSIVE]