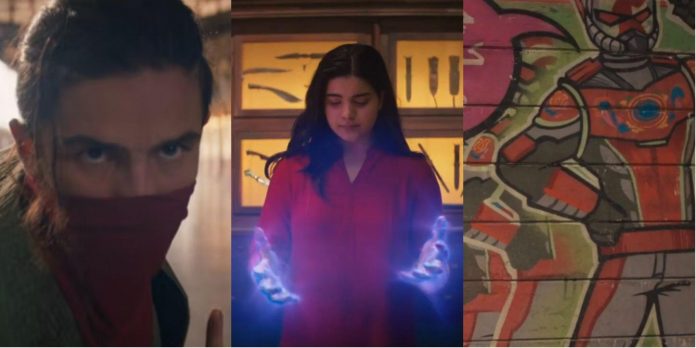 The following contains spoilers for Ms. Marvel Episode 4, “Seeing Red.”After three episodes in Kamala’s home state of New Jersey, Ms. Marvel takes Kamala and her mother across the world to Karachi, Pakistan. Kamala’s grandmother wants the duo to come visit her after she and Kamala both have a vision of the train that she rode as a toddler after she was separated from her own mother.

The episode allows the audience to get to know some of Kamala’s extended family and for Kamala to get back to her roots. While she’s in Pakistan, the episode borrows from a specific comic book storyline and features plenty of Easter eggs for Marvel fans.

Fans will remember that Moon Knight hid QR codes for free comic books in the episodes. The same is true of (at least) this episode of Ms. Marvel. “Seeing Red” features a QR code on the front of the photo stand where Kamala asks for directions to the train station.

Specifically, the free comic book is Ms. Marvel #12. The episode borrows heavily from the events of the comic, in which Kamala goes to stay with her Naani in Pakistan. In the comic, Kamala struggles to figure out where she fits in as she’s seen as too American for her cousins in Pakistan and her family even tones down spices in her food because she finds things too spicy.

When Kamala makes the trip to the Karachi train station, she comes across a mural of one of her favorite Avengers. Scott Lang’s version of Ant-Man is depicted in art that shows him changing size.

The art also features a note at the bottom that it’s based on art by Adrian Alphona. Alphona is a prolific comic book artist who worked on the first run of the Ms. Marvel series to feature Kamala Khan as the title character, and has been referenced before in the series. The artwork also says it’s the fourth in a series, just as this is the fourth episode.

Despite everything that happened at Avengers Con, it looks like Kamala was able to snag herself some merchandise while there. Instead of wearing one of her many tee shirts depicting one of the heroes in the MCU, her trip to Karachi sees her wearing a tee shirt that references the first episode of the show instead.

“How do you know I’m not Canadian?”

Kamala gets called out as an American multiple times while she’s in Karachi. When she’s confronted by Kareem in the street, she jokingly responds, “how do you know I’m not Canadian?” As he points out, her New Jersey tee shirt clues him in, but the line is a bigger reference. Actress Iman Vellani is from Canada, specifically, from Markham, Ontario.

Kamala is introduced to a secret organization in which members take on the mantle of the Red Dagger. They are somehow able to sense the presence of Noor, the energy that fuels the dimension where the Clan Destine are from.

Kareem, the young man who first fights Kamala, and then introduces her to the Red Daggers is a hero in Pakistan in the comics as well. His codename, as fans could likely have guessed, is Red Dagger in the comics.

Damage Control has been a persistent threat to Kamala in the series. This episode, however, gives fans an expanded look at what they get up to other than tracking powered people and confiscating weapons.

For one thing, the weapons the guards of the prison use against the Clan Destine appear to be repurposed alien technology that the audience has seen in Spider-Man: Homecoming.

What’s interesting is the prison itself. The last prison in the MCU for powered people was the Raft, seen and referenced in multiple projects, but not run by Damage Control. The prison has also been seen in trailers for the upcoming She-Hulk series on Disney Plus, suggesting Damage Control will have an even larger MCU presence going forward.

During most of the episode, Kamala is clad in red, yellow, and blue, including a yellow star on her jeans that resembles the star on Captain Marvel’s uniform.

When she is given an article of blue clothing with “history” later, she’s fully in her red, yellow, and blue color scheme that she shares with Captain Marvel and her own comic book costume. She doesn’t have the full costume yet, but her clothing is shifting closer to it.

Kamala Falls Through Time And Space

When Kamala’s bangle is hit by Namja’s weapon in the middle of a fight, fans will see patches form behind her of purple light, not unlike the hard light created when she uses her abilities. The effect, however, of appearing to tear a hole in space and time, is also a familiar one in the MCU.

It actually looks the same as when Clea, in the Doctor Strange And The Multiverse Of Madness credit scene, opens the fabric between dimensions for her and Stephen Strange to jump through. It’s not clear if that means the vision Kamala has means she actually temporarily travels to a new dimension in order to access it though, or the effect is just a coincidence.

The idea that the Red Daggers present to Kamala of the Noor Dimension only being separated by a thin veil from the world is actually similar to the ideas of multiple dimensions present in the first Doctor Strange movie as well. It also works with the idea of Shang Chi’s movie presenting another realm hidden on Earth.

Changes To The Credits

The credit sequence has some changes in the art on buildings. For one, some of Kamala’s garb in the illustrations is different, reflective of the styles seen while she’s in Pakistan. Likewise, the traffic lights are different, the Pakistani flag is reflected in the green lights instead of them being the solid green when Kamala is in New Jersey.

Ms. Marvel is currently streaming on Disney Plus.

A Photo Of Scarlett Johansson In A Test Suit Of Black...

Monsters at Work: Why isn’t Boo on the Disney+ series?