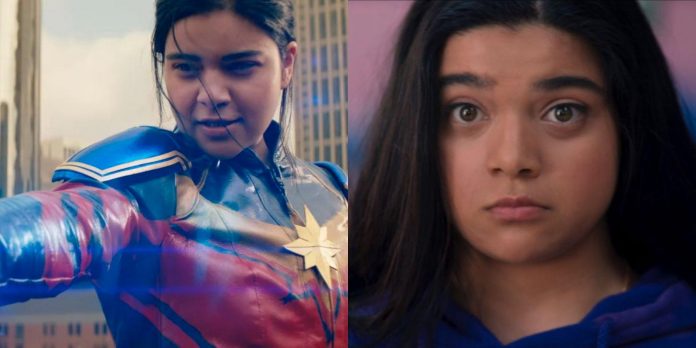 One of the things that Ms. Marvel has made work, even if she’s walking a tightrope, is that there was very little focus on superheroes in the first two episodes of the series. The premiere episode of the series could be excused for this simply because the Disney+ show needed to introduce all the new characters. It was also necessary to make sure that people really fell in love with the teenage girl at the center of the new show, learning her identity and how she fits into the wider world of “Miss Marvel.” While it seems that this was achieved with the first episode of this new Marvel series, the second episode worked to show what Kamala’s daily life is like as she begins to come to terms with the possibility of being a superhero.

Since everything has been set up and the characters have already been introduced, the second episode of “Miss Marvel”, not too action-packed, could have been a problem if it wasn’t executed exactly right. The good news is that, just like in the first episode, the second part was really done almost perfectly. Even if it turns out that in the series as a whole, the alter ego of the superhero Kamala Khan will be mostly in the background, it is enough in the series that he may be liked as just a look at the life and times of a young Pakistani-American. a teenager who is just trying to find his way in the world.

RELATED: The Creative director of Marvel Midnight Suns talks about the fantasy hero, social elements and much more

The second episode of “Miss Marvel” begins immediately after the premiere of the series has ended. Kamala is still struggling with the consequences of disobeying her parents, as evidenced mainly by her mother’s coldness, even when Kamala tries to apologize for running away. However, the show also does a great job of not dwelling on this particular plot point more than it needs to. The first episode has already shown that her parents are both loving and strict, and it seems that repeating it too much this week would be overkill.

Instead, this story chapter shows how Kamala and her friends continue to live their lives despite the fact that the school is buzzing about a new superhero in Jersey City. Perhaps because Kamala and Bruno know exactly who the new hero is, they are more interested in keeping everything a secret for now, while Nakia just wants to live her best life and maybe even find some ways to change what she considers things. they make mistakes in their daily lives. It’s also where Ms. Marvel originates from one particular storyline in the early comics, when Kamala and Nakia head to a mosque that leaves much to be desired in their eyes.

Soon after the setting, which will be familiar to any of the fans who have been familiar with the Miss Marvel comics from the very beginning, the series abruptly turns into its own narrative. This gives viewers a better idea of what Nakia is actually offering. This is a great scene for several reasons, especially for those who may not know what Pakistani-American culture is in this country. The scene allows viewers of “Miss Marvel” to see how these people interact with each other beyond some of the established stereotypes that have been driven to death in this or that sitcom. It also allows viewers to see that Nakia has to be reckoned with when she sets her sights on what she wants.

In fact, while Nakia may have mostly been a sort of minor character in the first episode of “Miss Marvel,” this release showed that she is a little more critical of Kamala’s life and story. Juxtaposing how Kamala and Nakia deal with being Middle Eastern teenagers in downtown New Jersey and how they try to blend their culture with their peers is a pretty important and exciting aspect of episode 2.

There’s another part of Pakistani-American culture that takes center stage when it comes to this episode of “Miss Marvel,” and that’s what’s known as the “Section.” For those who are not aware, the Partition occurred when the UK finally left the Indian subcontinent, and the territory was divided into what is now India and Pakistan. The show talks about this particular part of the real story without delving into it, mainly because it is clearly shown that all the characters involved know exactly what happened.

The division of land between people who mostly lived peacefully together before the transfer of power in 1947 was one of the bloodiest periods in human history, when it is estimated that millions of people were killed in skirmishes that arose throughout the region. It seems that the Khans were one of the families who fled the region after this violence, or perhaps even because of the lasting effects of the Partition, and settled where Miss Marvel is now taking place.

The show mixes a real story into a show about a girl who miraculously has superpowers, partly because it doesn’t hit the audience over the head. Instead, it’s vague enough that there will be absolutely be viewers who want to know more about what exactly was at the center of this week’s story. It’s also great for those who don’t understand this culture very well to see what makes Kamala Khan and her family tick.

To be clear, the first episodes work, despite the fact that there aren’t many superhero antics in them, precisely because the characters and personalities are so funny. However, it seems that the third episode may cause a legitimate reaction from comic book fans to Miss Marvel, who really want her to start using her powers. On the other hand, so far it seems that the show is perfect for a deeper dive into what makes Kamala and her family tick, as well as setting up against some powerful enemies. While the series continues to be good pure entertainment.

The actress from another vampire series who almost played Rose

Dwyane Wade worries about his daughter Zai’s safety “every time she...