Home Entertainment Miss Marvel Episode 2 contains an important conversation about the children of... 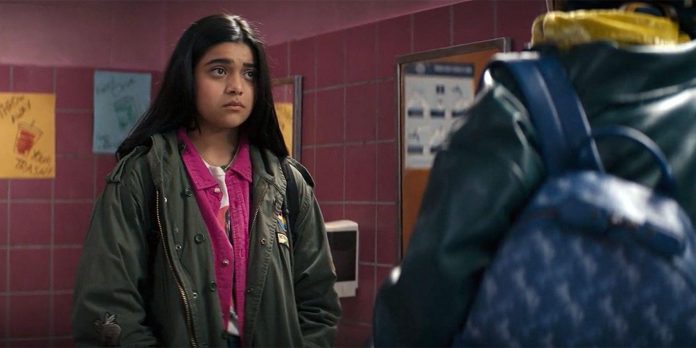 “Miss Marvel” from Marvel Studios immerses viewers in the world of Kamala Khan, a 16-year-old Pakistani-American teenage girl who explores her newfound superpowers. Although it may just be a story about the growing up of a teenage hero, Kamala’s world is shrouded in pieces of her culture and religion. Her best friend, Nakia Bahadir, is dealing with a similar scenario, and one conversation between two friends in episode 2 stands out for describing their struggle in simple words.

The two best friends in “Miss Marvel” grew up in New Jersey, but they are culturally different. Kamala Imana Vellani has Pakistani roots, while Nakia Yasmin Fletcher comes from a Turkish family, as confirmed in the comics. These two characters are what many would call children or children of a third culture, which, as Merriam-Webster defines, is “a child who grows up in a culture different from the one in which his or her parents grew up.” They often struggle to adapt because of their cultural or religious beliefs, and Nakia manages to voice the situation without much effort.

In the second episode of “Miss Marvel”, two friends openly discuss the life and difficulties of adolescence. Kamala has just found out that she can shoot cosmic rays from her hands and cannot control her power. When her nose starts glowing in class, she runs to the toilet to hide. Nakia follows her there, and although her assumption about why Kamala is hiding is not true, it is clear that the two friends are connected by their personal problems.

The conversation begins with Kamala admitting that “everything is changing very quickly.” This is a problem that worries most teenagers in high school, and it has no cultural significance. But Nakia’s parents, who cannot “make eye contact” with her because of her hijab, headscarf, is a completely different story. Her revelations that growing up in a society that didn’t fit her culture is the true definition of being a child of a third culture. On the one hand, she tries to keep up with her daily life, and on the other, she has to deal with her parents’ judgments about her choice based on their culture.

“All my life I’ve been either too white for some, or too ethnic for others,” she says. She calls the whole situation “very uncomfortable, lame in-between.” This situation is relevant for everyone who grew up in a country other than the one from which their parents come. While the children of the third culture are struggling to fit into their current environment, they either look different, have a different skin color than the general population, or are too “ethnic” by the traditional standards of the country. To cope with the situation, Nakia decided to wear a hijab, but this did not completely solve the problem.

She says that when she first put it on, “she was hoping to shut up some people.” However, when people’s attitudes remained the same, she soon realized that it didn’t even matter. “I kind of realized that I don’t really need to prove anything to anyone. When I put this on, I feel like myself. It’s like I have a goal,” she says. It’s great that Nakia managed to cope with the situation, despite the fact that she is a child of the third culture, because many of them, as a rule, have been experiencing racism and Islamophobia for a long time. It doesn’t help that the representation of minorities in the mainstream media is not the most positive.

For many years, South Asian or Muslim characters have been created based on racist stereotypes. Anyone from India or Pakistan in Western cinema speaks with an accent and is often portrayed as ignorant about certain policies or world issues. Over the past decade, the participation of Pakistani and Indian actors in Hollywood has increased, and they have begun to play relatively more significant roles. But, unfortunately, most of them are still portrayed as villains, terrorists or, conversely, some kind of nobles. It seems that there is no balance. However, many studios overlook the fact that many actors from South Asia either studied or lived in the West at some point in their lives, and many even grew up here. Thus, despite the fact that they seem different, they carry similar ideologies.

Kamala’s life in “Miss Marvel”, who grew up in New Jersey, is obviously influenced by her environment, friends, classmates and many external factors. She is well acquainted with the culture of her land and is just a teenager who is trying to come to terms with sudden changes in her life. The only difference is that when she is at home, her family pronounces “bismillah” before getting down to business, or says “assalamu alaikum”, which literally translates as “peace be upon you”, greeting their fellow Muslims. Judging her by these traits and forming racist stereotypes would be unfair, because at her core she is just a girl living in New Jersey.

Until now, Kamala’s ethnicity and race have not played a big role in Miss Marvel.

narration. Yes, she wears a necklace with her name in Arabic, but she is not called out for it and is not ostracized for her faith. However, the inclusion of the Scum experience in the narrative was an important decision on the part of Marvel Studios. Although racism in the series has not been revealed too much yet, a conversation between two friends confirms its existence. The main problem still exists, and although these two young girls are just trying to be themselves, both sides consider them outsiders. Their so-called friends consider them “too ethnic,” while their own families consider them “too white.” It’s already hard to be a teenager, given that at such a young age you have to sort out your life, but dealing with the judgment of others about what they believe in can be a difficult experience. And this is something that everyone who has ever been a child of the third culture fully relates to.

“Miss Marvel” is broadcast on Disney Plus.