Home Entertainment Miss Marvel: 9 Hints the series Gives about the Future of the... 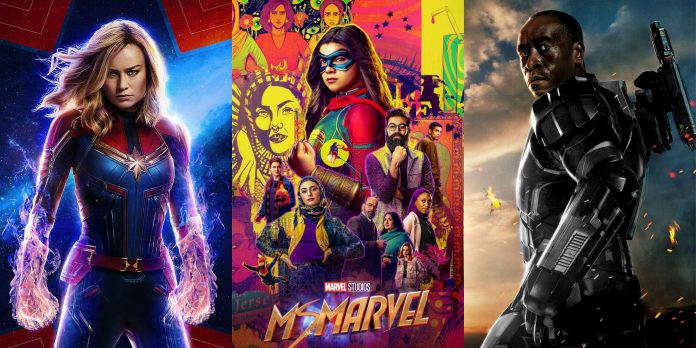 What started out as a fun teenage adventure in the MCU grew into something franchise-shifting with the final episode of Ms. Marvel. The series introduced audiences to Iman Vellani as the loveable superfan-turned-superhero Kamala Khan AKA Ms. Marvel. It explored not only teenage life in school but also familial and religious relationships all in the context of a superhero story.

The series finale – or hopefully, season 1 finale – was full of heartwarming moments, thrilling sequences, and genuinely groundbreaking reveals. In looking at the series and what it accomplished, fans can guess where Phase Four is headed and how it might get there.

Journey Into the Cosmos

A contentious opinion permeating throughout the fanbase before Ms. Marvel premiered was regarding alterations to her power and origins. In order to better connect her with Captain Marvel and set up her involvement in The Marvels, her powers were expanded to be more cosmic-based. This led some to believe that she would not retain her stretchy polymorphing powers, but the finale showed that she can still do all that and more.

This change is significant though as it signals the MCU’s deliberate shift to showcasing the cosmos more. Of course, space has been a steady feature in the franchise, but it’s taking on new importance with more cosmic tales coming down the pipeline. Right now, there are two major arcs being explored – with Loki, Spider-Man: No Way Home, and Doctor Strange in the Multiverse of Madness focusing on the Multiverse while Ms. Marvel, Thor: Love and Thunder, and more to come highlighting the cosmos and new dimensions.

Ms. Marvel was quite a revelation aesthetically for the MCU. From its first sequence covering the events of Avengers: Endgame to its implementation of distinct visual styles and effects, it set itself apart from the norm. This is just the latest in the trend in exploring new styles and methods for storytelling, and Ms. Marvel proves that the Disney+ TV shows are the best place for such experimentation.

She-Hulk: Attorney At Law is up next – along with I am Groot – and it already looks like it will be continuing with this. Based on the comics fans had theorized that the show could break the fourth wall, and it seems like the first trailer corroborates those ideas. Elements like these, on top of compelling stories and exciting spectacles, are what help maintain audiences’ interest over the show’s run.

In exploring Kamala’s new origins, Ms. Marvel introduces djinns and their home, the Noor Dimension. Unlocked by the bangle, she is able to access the Noor to create her hardlight structures and embiggen herself. They never venture into the Noor Dimension, but showcase how the power held there could be destructive to the main universe.

This is just another in the line of new dimensions in the MCU. For the longest time, it was just the Quantum Realm from Ant-Man, but now it has expanded vastly and quickly. Doctor Strange in the Multiverse of Madness showcased many alternate universes as Easter eggs, and Thor: Love and Thunder also brought in the Shadow Realm.

Damage Control fills the void of Ms. Marvel’s final antagonist after Najma’s sacrifice to close the veil in the penultimate episode. Interestingly, unlike other antagonists, they really seem like they might have a future elsewhere in the MCU. Damage Control was first introduced in Spider-Man: Homecoming and then they returned in Spider-Man: No Way Home, showing they’ve evolved from cleaning up after heroes.

Here it seems they are responsible for tracking and hunting down enhanced individuals, which could set them up to be involved in the superhuman registration act as part of the Sokovia Accords. Therefore, they could return in Armor Wars, Thunderbolts, and more. Individually, Arian Moayad’s Agent Cleary has different motivations than his colleague Agent Deever, played by Alysia Reiner. How he wanted to approach things – along with his role in Spider-Man: No Way Home – might support theories that he is an undercover Skrull, and could thus, involve Damage Control in Secret Invasion.

It’s All About The Branding

The series premiere started out with a bang by showing off Kamala as a true superfan, running her own YouTube channel, and then going further by showing her at AvengersCon, surrounded by all that great merch. The heroes have become celebrities and have shown as thus before, but never in this capacity. This means that the MCU will likely and should explore the idea of superheroes as celebs.

This is happening in The Boys, but that’s obviously an entirely different monster. Here it will be interesting to see characters like Captain Marvel and eventually, Ms. Marvel herself contend with their own experience of fame. As done in Ms. Marvel, the MCU will gradually become more meta and hopefully engage in commentary on itself.

More Than A Superhero Show

Essentially, Ms. Marvel is just a high school comedy. The superhero and mystical elements in the show are supplementary, enhancing the great foundations that were already built. The same goes for Moon Knight – an action-adventure meets psychological thriller – and hopefully for She-Hulk: Attorney At Law, which could partly be a comedy law procedural. This genre-fication allows these shows to transcend past standard superhero content.

Stray Kids: The best moments of the group in their second...