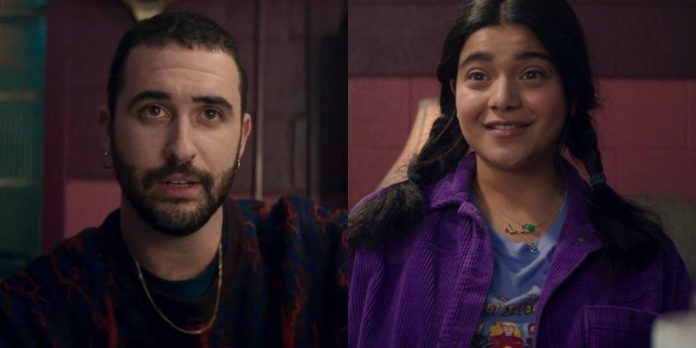 The ongoing series Ms. Marvel is full of Easter eggs that reference comic books, creators, and other films in the Marvel Cinematic Universe. However, it also has several non-Marvel references to popular movies and series, which could fly over some fans’ heads if they’re not paying attention.

From a sneaky line from Pixar’s Encanto to a scene that looks like it came right out of Jurassic Park, these fascinating non-Marvel Easter eggs are fun to spot and highlight how much thought and attention to detail went into the show. With the series nearing its end with every new riveting episode, it’s the perfect time to look back at some of the best references so far.

After a disastrous driver’s test that leaves her parents disappointed, Kamala and her likable best friend Bruno discuss the possibility of them going to Avengercon. When Bruno says he guesses they’re “not going to Avengercon” because of Kamala’s poor driving skills, she quickly retorts with a sneaky reference – “no, no, no, Bruno.”

Those who have heard the popular musical number from the animated Pixar film Encanto may immediately recognize the lyrics of the song. It takes place when Mirabel’s relatives warn her against talking about Bruno. The funny line is followed by Kamala’s brilliant plan about how they will get to Avengercon even without a car.

A stressful conversation with her hip school principal, Gabe, leaves Kamala unimpressed. He reminds her that “college admissions” are coming up and it’s important that she start thinking about her future. Gave gives Kamala a task, which involves looking “in the mirror” and asking herself “who is that girl” she sees “staring straight back at” her.

Kamala quickly catches on and calls him out for “reciting lyrics from Mulan.” The iconic song is apt for the moment, as Mulan sings it after feeling like she can’t fit in or live up to the standards set by those around her. Just like the heroic character, Kamala will soon find out what she’s capable of.

Everybody knows that Kamala’s relationship with Muneeba is complicated, to say the least. This is why asking for something as simple as attending a convention is a daunting task. The situation is made worse by her failed driver’s test, meaning she’ll have to ask her mom to bring her and Bruno to the event.

Bruno’s advice seems straightforward – go home, “sit down at the dinner table, smile, and” just ask – but Kamala knows it’s not going to be that easy. Bruno’s remark about how they should “stop acting like” Kamala’s “mom is Darth Vader” is a hilarious Star Wars reference that hits close to home for the protagonist, who just isn’t ready to face the inevitable rejection.

When Bruno is called to the principal’s office, it’s not for anything bad. In fact, Gabe excitedly informs him that he has been accepted to the “Early Immersion program at Caltech.” He’s confused by Bruno’s reaction, especially by his insistence on having to “think about it.”

Gabe tries to persuade Bruno by using some gut-busting movie references, with the first one being a nod to Star Wars. He asks Bruno if he knows “that part in the movie where someone comes to the main character and” says they’re “going to be a Jedi.” Gabe just wants Bruno to be the Jedi, the accomplished college student he’s destined to be, but doesn’t realize that Kamala’s newfound abilities are holding him back.

Gabe knows that Bruno is incredibly smart, which is why it’s not so surprising for him that he got into Caltech’s prestigious program. What he doesn’t know is that Bruno is way too busy helping Kamala navigate her new powers, which makes him hesitate to accept the offer.

Gabe’s frustration is expressed in the form of movie references, with one clearly alluding to The Devil Wears Prada. He asks he Bruno wants “to answer phones of a demanding but impossibly chic magazine editor,” implying that this is his shot at something most people can only dream of.

Kamala is immediately smitten with Kamran when they first meet but falls even harder after he helps them escape Zoe’s party. As she’s sitting in the passenger seat, she’s shocked to hear a song from a familiar band, and asks Kamran if he’s into “Bollywood movies and stuff.”

Several references to Bollywood follow, including “the greats like Baazigar” and “DDLJ.” Baazigar is a romance-thriller film about a man who’s out for revenge. DDLJ stands for Dilwale Dulhania Le Jayenge, a popular musical about two people who fall in love during a vacation in Europe. They both feature the talented actor Shah Rukh Khan, who Kamala refers to as “SRK” in the show.

Right Out Of Jurassic Park

An intense scene in a kitchen takes place after the Djinn attack Kamala during Aamir’s wedding. Kamran and Bruno try to help her, but they’re easily defeated by the strong antagonists. They corner Kamala in the kitchen where she tries her best to hide.

The sequence that follows looks like it came straight out of the legendary dinosaur movie Jurassic Park, as there’s a similar moment where the two children in the movie hide from velociraptors. The dinosaurs are just as scary as the determined Djinn, who are also hunting down an innocent young character.

When representatives from the Department of Damage Control barge into the mosque looking for the masked superhero, Nakia and the sheikh are understandably not too happy about the intrusion. Nakia shows just how much of a badass she is by standing up to them, firmly reminding them that “law enforcement officers are not permitted to enter a private space without a signed warrant.”

Sadie tries to retort with a snide remark about how Nakia “studied the criminal code in homeroom,” to which Nakia wittily responds by referencing Law & Order, a legal drama series first released in 1990. Those binge-worthy episodes came in handy, as Nakia pointedly continues by saying she’s “not wrong.”

The Spells & Secrets trailer reveals a Rogue-Like setting in the...