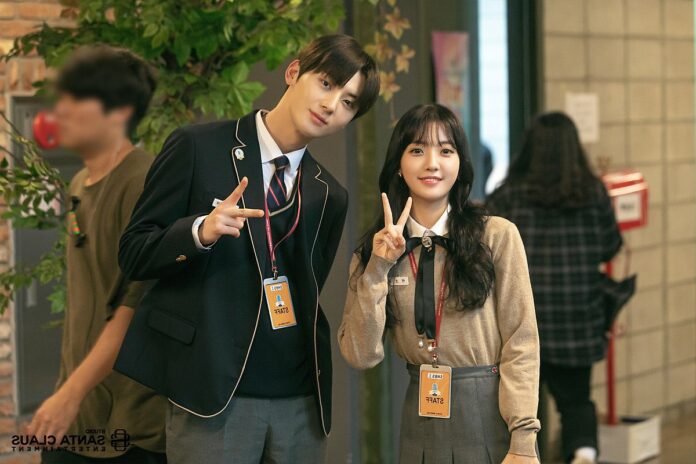 Although the youth romance K-drama Live On is a beautiful story starring Hwang Min Hyun (Minhyun) and Jung Da Bin, since its debut it has scored quite low in viewership measurements.

Despite the bad news, the cast of Live On along with the members working on the set are making every effort to carry the drama forward as shown in the latest behind-the-scenes video of the shootings.

Live On is set in the Seo Yeon High School broadcast club, where Jung Da Bin is known as Baek Ho Rang and Minhyun as Go Eun Taek that premiered on November 17.

The clip begins with a scene set at the school festival, during a break, Yang Hye Ji playing the role of Ji So Hyun shows that she drew various drama characters on the computer. Minhyun asked to see the image he made of himself and said, “I have high hopes for it.”

After reviewing the images, Minhyun tells the camera, “I ran away when he was drawing because he sure didn’t look like me. But after looking at the results, I realized that he looked like me.”

Choi Byung Chan also appears in the role of Kim Yoo Shin on stage ready to sing in a watermelon mask. The actor took the stage with his mask, but stumbled because he could not see or hear the director correctly.

Lastly, Minhyun and Jung Da Bin appear together filming a Live On scene in which their character went to see how he was doing after a small explosion on set. They rehearse the scene thoroughly with the director and joke about how he looks like a puppy.