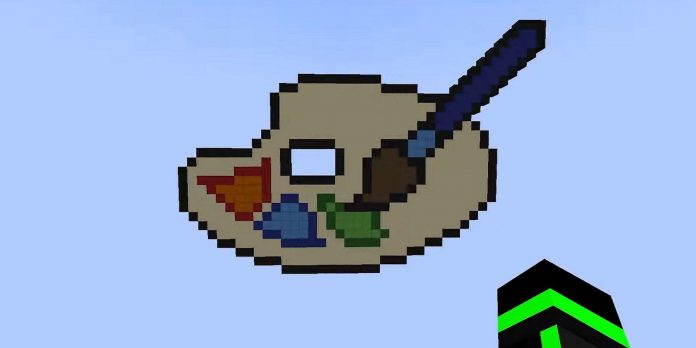 By now, many would be forgiven for thinking that the Minecraft candle would burn out soon. However, considering that it is still one of the best-selling video games of 2022, despite the fact that it was released in 2009, there is so much love left, both from fans and from the studio itself. The reason it’s so popular even after a decade or so is because of the huge number of things that can be made. And as part of the challenge, two people decided to do something a little different.

As PCGamesN noted, YouTubers MattBatWings and Sloimay were given only 24 hours to come up with a Minecraft project that would amaze the judges. After pondering a couple of ideas, they eventually settled on recreating MS Paint, the ubiquitous drawing program that comes with copies of Windows. The video shows how the two show a creative approach to their project, and it quickly becomes obvious that this is not an easy task, especially in such a short period of time. The result is something very remarkable, in fact, it is a giant program that actually draws on a huge canvas.

MattBatWings is no stranger to the complex tricks of the red stone in the name of the Mojang sandbox. In fact, this MS Paint build uses an image copying device that they recently built into Minecraft. The final design comes complete with a regular brush, a line tool, a circle and square tool, and a tool that allows people to draw a sprite and transfer it to the canvas. This is a pretty impressive collaboration between two talented developers, and it even uses an algorithm created by the Layer.

There are countless projects that fans can create and brag about, some of them are complex, and others, such as this last example, are recreations of things that already exist. Not so long ago, YouTuber Fundy created his own giant version of Tetris in Minecraft. They also made their own horror-inspired version of Pac-Man, while others rebuilt blocky versions of worlds taken directly from other game franchises.

Given that Minecraft is a game with almost infinite replayability, it’s no wonder there are so many possible things, and why so many people still love it. It is for this reason that the game is strong to this day, because the only limitation, no matter how banal it may sound, is the imagination of the player. It will be interesting to see what other surprisingly complex ideas people will implement into the game in the future.

Horizon Forbidden West: Where To Find The Avempest And How To...