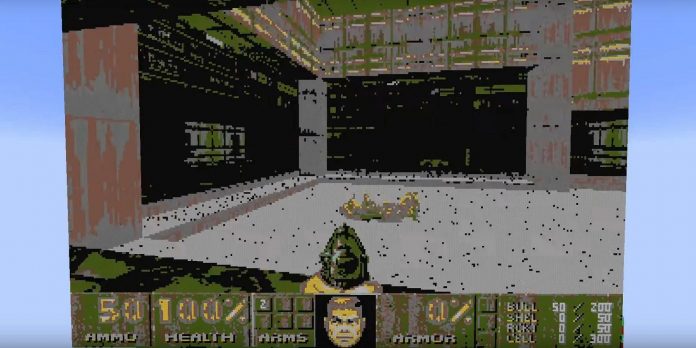 To prove that almost anything can be done in Minecraft, the user uploaded a video showing how the original Doom works in the Mojang sandbox with an open world. It’s really a game that always has something to discover, and that’s probably the reason why so many people keep coming back to the blocky world. Despite the fact that it was released in 2011 or 2009, if you count the earliest versions of the game, it seems that millions of people around the world are still finding new things to create.

Of course, the cult release of id software in 1993 had no less, and maybe even more, impact on the industry than Minecraft. Although at the moment he is almost 30 years old, classic FPS is still being played. In fact, people ported Doom to some interesting devices, such as a treadmill screen, a vape pen, an iPod Mini, and even a John Deere tractor. Being able to launch a game in Minecraft seems like an almost logical step, given all the other systems that can now play the game, albeit sometimes in its infancy.

What’s most interesting about what Reddit user science_dude123 did is that they managed to get Doom to play the vanilla version of Minecraft. This means that no mods were involved in the project at all. According to the user, they were able to use the console command of the game to program their own compiler, consisting of 2.3 million command lines, to run FPS. One thing should be noted: although this is a real game running in Minecraft, it only plays at 1/500 speed. The video showing how it works has been sped up to represent the normal speed of the game. In any case, it’s still an impressive feat, especially when you consider that no mods have been used.

There was another instance of Doom running in Minecraft, but it used the VMComputers mod. This, of course, does not detract from the final result, and it really shows that it is possible to make an influential shooter work on almost anything, including in another game.

At the other end of the spectrum, someone created a mod that actually turned Doom into Minecraft. It seems to assume that the two games are mutually compatible, and are also iconic IP addresses that have had a significant impact on the industry. It will be interesting to see what other unique things will be created using only the vanilla version of the Mojang game.

Mandy Moore’s Post-This Is Us Concert Tour Has Been Canceled, But...