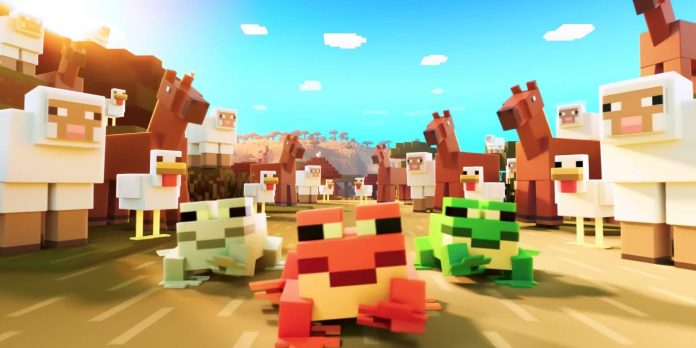 Minecraft fans have probably been looking forward to the announcement of the next Minecraft Live event, and now it has been officially revealed in the trailer. As Minecraft is constantly evolving and adding additional games like Minecraft Dungeons to the list of games to play, there are bound to be some interesting announcements made during the show.

Minecraft Live in 2021 led to the addition of exciting new content for the main game, mainly in the form of The Wild Update. In Minecraft Live 2021, there is an opportunity to vote for which mob will be added to the game next, and this vote is reflected in the new trailer.

Mojang and Microsoft have released the official Minecraft Live 2022 teaser trailer, and it’s pretty funny. The video begins with one of the game’s newest mobs, frogs, casually playing to the music playing in the background as they pass through various areas and biomes from the titles. During the video, various Minecraft mobs (both friendly and unfriendly) join the parade, and the frogs continue to gather. Things get even worse when a Guardian intervenes, but the party eventually continues until the crowd stumbles upon an Alley that will lead them to a train heading to Minecraft Live 2022.

Minecraft Live 2022 is scheduled to take place on October 15, beginning at noon Eastern Standard time. Fans can tune in on almost any device with internet access to see what will be in the store, and another crowd vote will be held at the event, as before, but this time players will be able to vote for their favorite in the game via the launcher or on a specific server. Fans can also expect to see information about Minecraft Dungeons and Minecraft Legends.

Promotional teasers and trailers for Minecraft events are not new, but this one is especially funny. Not only does it demonstrate some of the chaos that can happen on a normal day in Minecraft, but it also highlights some of the game’s oddities and Easter eggs, such as a frog devouring a goat whole when she’s having fun with the rest of her kin.

Minecraft has been around for many years, but shows no signs of slowing down. Between the constant influx of new content from official developers and the creations of fans, which sometimes take years to create in Minecraft, players always have something to see and do. With the inevitable addition of a new mob and other content that has not yet been announced, Minecraft is unlikely to disappear in the foreseeable future.

Why Is The Chilean League Not In FIFA 22 And In...