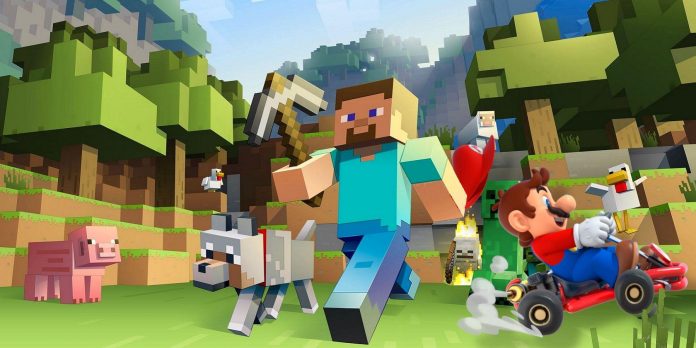 From newcomers to the industry to veteran gamers who have grown up with technology, it seems that Minecraft is a game that attracts everyone’s attention. Released in 2009, it’s amazing that it’s still as strong as it is now, but since it’s one of the most popular video games of this year, it’s clear that Mojang’s open-world IP sandbox still attracts players despite its age. In part, it depends on the fans themselves, who always demonstrate interesting projects, and also add their own zest.

In the Minecraft subreddit, the user Cirelectric introduced something in the game that is rarely mentioned, at least officially. That is, they have moved the elements of Mario Kart, in particular the vehicles themselves, into a new resource pack that they have just completed. If that’s not enough, a short video in the thread shows that the maps really work, and they even managed to build a race track. The vehicles pretty closely match their original Nintendo design, and the user has made them available for download.

RELATED: Minecraft fan shows off all the mobs added over the years

Even though it’s not known as a racing game, it’s interesting to see how someone will incorporate it into Minecraft, and if it’s going to be a race, Mario Kart feels like it’s a perfect fit. After all, this series is a long-standing gaming tradition, the first part of which was released in 1992 for the SNES. Three decades later, it is still popular, and Mario Kart 8 is the best-selling racing game of all time. The Cirelectric resource pack shows how much the classic Nintendo franchise is loved, and also demonstrates the current capabilities of Minecraft.

I finished my “Standart Kart Resource Pack” based on Mario Kart and uploaded it to Curse Forge for free. Enjoy! → https://www.curseforge.com/minecraft/texture-packs/standart-kart from Minecraft

Even without fan additions, the sandbox name will probably remain the same favorite. Having said that, there are many texture packs and mods for Minecraft that extend an already extensive game. With any luck, Nintendo won’t mind the Mario Kart package from Cirelectric, as the user says it’s completely free and therefore they don’t profit from it.

After the official announcement of Minecraft Legends, which is a spin-off of the real-time game, Mojang Studios seems to want to take it to the next level. There have already been similar Minecraft Dungeons, but Legends is another way to show that the original game has much more to offer, despite the fact that it is already one of the biggest intellectual possessions in the history of games.

Chicago Fire 9×16: All About The Season Finale of The Series...