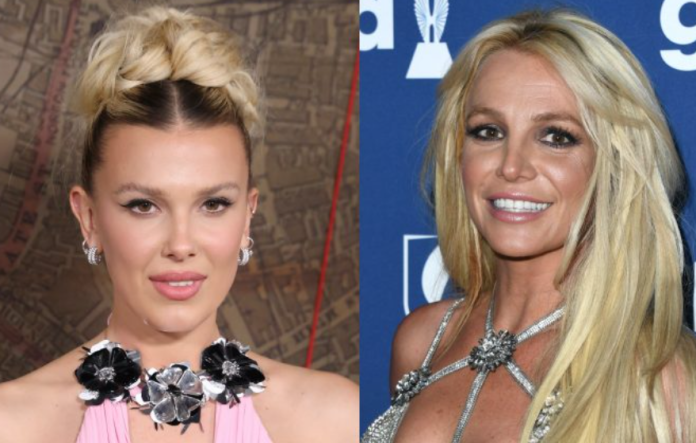 Millie Bobby Brown has stated that she wants to play Britney Spears sometime in the future.

The 18-year-old actress, best known for her role as Eleven in the TV series “Stranger Things,” appeared on the Drew Barrymore show on Monday (November 7) to promote her new Netflix movie “Enola Holmes 2.”

During the interview, host Barrymore asked Brown if there was anything on her career “wish list” for the next decade. “I want to play a real person and think for myself, Britney,” she replied.

Brown, who also became famous as a child, continued: “[It] will be Britney Spears. I think her story, first of all, resonates with me. I just grew up in front of the public, watched her videos, watched interviews about how she was younger.

“I mean, it’s the same with you [Barrymore]. I see a struggle for words [in her interview]. And I do not know her, but when I look at her photos, I feel that I can tell her story correctly — and only her.”

Spears’ controversial 13-year guardian was terminated in November 2021. In September of the same year, a judge removed her father Jamie from the position of her guardian.

He took on the role after his daughter’s highly publicized mental breakdown in 2007.

In July 2021, Britney announced that she wanted her father to be accused of abuse of custody, and stated that she was prohibited from having more children, getting married or taking out an IUD.

This summer, the singer returned to music, teaming up with Elton John on the joint single “Hold Me Closer”. Before the track’s release, Spears said she felt “overwhelmed” preparing for her comeback.

In September this year, the pop star said it was unlikely she would ever perform live again after a past experience left her “traumatized.”

Earlier this year, Britney Spears reportedly signed a “record” contract to publish a candid book detailing her career and family life. She later described the process of writing the memoir as “healing and therapeutic,” but said it was “difficult” to address her past.

Meanwhile, Millie Bobby Brown had previously expressed a desire to play Halsey in a biopic about the singer’s life.