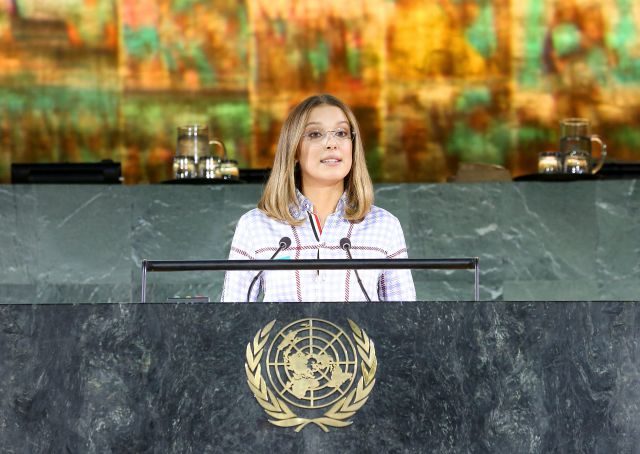 She is only fifteen years old, but he has already become one of the great stars of the moment. Indeed, we talk about Millie Bobby Brown. The Stranger Things actress has become one of the most claimed since it was released in the Netflix series. Her role as Eleven has opened the doors of Hollywood and today she is one of the most influential teenagers in the world.

In fact, this influence, Millie uses it to do good and for months collaborates with UNICEF as an ambassador to protect the rights of children. Moreover, he has been the youngest person in history to hold this position.

Well, this Wednesday, November 20, on the occasion of World Children’s Day, the young woman gave a highly applauded speech at the UN. The young actress had the opportunity to address world leaders to talk about a problem that is in force in society: harassment in social networks. In fact, Millie emphasized the dangers of the internet as the perfect setting for this new form of bullying.

“It’s a horrible feeling to look at your mobile and see the messages that people are sending you full of hate and aggressiveness, even with threats (…) Some of them are strange and anonymous from the internet. And as all stalkers feed on the fear of others, making them feel scared and hopeless. It is what happened to me. I was lucky. With the help of my friends, family and people around me I was able to overcome those negative emotions and regain my power. ”

The young woman has continued her speech, saying that there are “millions of children who are not so lucky”: “They keep fighting in the dark. I fight with fear. With insecurity Harassment and online threats are never harmless. They put the mental health of children in danger and cause stress. ”

In addition, the young woman has shared part of the speech on her social networks, thanking Unicef ​​for the opportunity to defend children’s rights: “Today was a beautiful day. I have been very grateful to have the opportunity to follow in the footsteps of my idol, Audrey Hepburn. She spoke with world leaders when the UN Convention on the Rights of the Child began. (…) Today is World Children’s Day and I am very proud to join young people from all over the world to ask world leaders to support us, listen and make changes. Protect us and anestro beautiful planet ”.