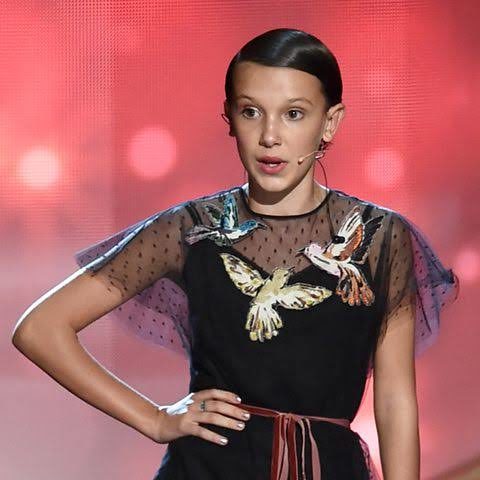 The day before yesterday, Millie Bobby Brown (Stranger Things) showed her commitment by making a touching and intense speech about harassment. At the United Nations Children’s Rights Summit in New York, the talented actress amazed the world by expressing her desire for all children to be heard when faced with harassment. She herself was a victim of this plague in the past, her voice and message were heard.

Although she was congratulated on all sides for her commitment, it was not just for her speech that Millie made her talk. Indeed, the actress had a new look very unexpected that has made a lot of reaction on the Web.

Accustomed to seeing Millie Bobby Brown dressed like any 15-year-old girl, fans were shocked to discover the actress completely transformed for this important event. The one who admitted to wanting to be taken seriously appeared more woman than ever. Millie sports indeed a strict haircut, glasses and a very mature outfit for a girl of her age. Internet users are also not private to share their shock: “You look so much older here”, “With this outfit, it looks like you’re 25” or “Why Millie Bobby Brown was 24 years old at once? ” Regardless, his commitment and his message are far more important than his physical appearance, and the bottom line is that his voice has been heard. Elsewhere in the news, Rihanna has named Normani, whom she is very close to as the first ambassador for her Savage X Fenty brand.