Home Celebrity Millie Bobby Brown (Stranger Things) not at all comfortable on the red... 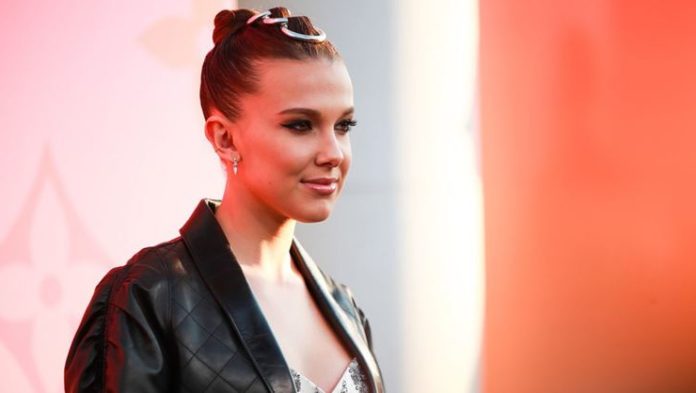 Millie Bobby Brown caused a sensation on the red carpet of the SAG Awards. But facing the photographers, the actress also seemed very embarrassed!

On January 19, Millie Bobby Brown caught the eye at the SAG Awards. But the actress of Stranger Things was very embarrassed on the red carpet of the event. Amused, she also shared a video on her social networks.

Millie Bobby Brown is the actress of the moment ! All the producers are snatching it up, and as proof: very soon the young girl will be on the poster for the next part of “Sherlock Holmes” by Enola Holmes. According to TMZ, the star of Stanger Things should receive a fee of 6.1 million dollars ! A very pretty gem so … In addition, she will also respond to Henry Cavill who will play the famous detective!

On the heart side, everything smiles at the beautiful Millie Bobby Brown! After having been in a relationship with Jacobs Startorius, she lives a cloudless love story with Joseph Robinson. This last 17 year old is also the son of Jason Robinson, an essential figure in the world of rugby! It is also the darling of the actress who formalized their relationship via Snapchat. A few days ago, the young man revealed an adorable photo of their duo on this social network.

MILLIE BOBBY BROWN ULTRA EMBARRASSED ON THE RED CARPET OF THE SAG AWARDS!
On January 19, Millie Bobby Brown attended the SAG Awards ! To do so, she also opted for a sublime dress signed Louis Vuitton . According to the magazine “Elle”, her outfit required more than 125 hours of work. In any case, the pretty brunette drew all eyes, and the photographer did not fail to capture it. But the young woman seemed rather embarrassed in front of the assembly.

Videos of Millie Bobby Brown’s arrival went viral on the web. Amused by this little buzz, the actress took over her social networks to share an extract of her arrival at the SAG Awards. “An awkward anxious girl , ” captioned the star under her post. But in the comments, his subscribers are very sympathetic. The proof in pictures!

Ashley Judd confirmed the cause of Naomi Judd’s death: “She used...