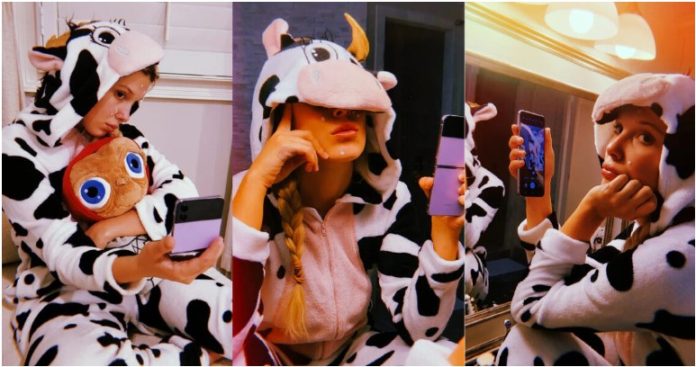 While Millie Bobby Brown is widely known for her role in the blockbuster TV series “Stranger Things,” the actress has also appeared in major movie roles, including “Godzilla: King of Monsters” and “Enola Holmes.” The teen star attracted people’s attention when she was just 12 years old. Having achieved fame as an actress, she not only created a huge fandom, but also took a place in their hearts forever. She currently has about 60 million followers on Instagram, where she is regularly active.

The Emmy-nominated star has restricted her use of social media after people subjected her to trolling and violent harassment. Despite this, the 18-year-old actor from time to time offers his true fans a peek behind the scenes. From posting photos with her boyfriend to promoting her future projects, she shares many things. Taking her time, Brown recently shared her hair mask routine, wearing glasses and a cute white T-shirt.

Millie Bobby Brown recently took to social media to share a cute video in her Instagram story. The young icon posted a video in which she applies a hair mask of her brand Florence by Mills. She was wearing a white T-shirt with scribbles, hoop earrings and glasses.

We all know that Florence by Mills has become quite popular since its launch in 2019. The Modern Family star used a Mane Character Vibes hair mask in the video, which cost $19.

“Say goodbye to thirsty hair with this deeply conditioning hair mask that helps smooth and moisturize our hair and also helps prevent annoying tangling and breakage during styling,” the product description on the website says. Millie Bobby Brown is constantly expanding the range of products that are safe for both customers and the planet.

Meanwhile, she is currently filming her new movie “The Damsel,” and has also joined the production team with Maso, Zach Roth and Chris Castaldi. The film revolves around Elodie, who marries Prince Henry after her family puts pressure on her. However, this marriage turns out to be a conspiracy against the main character, who will be sacrificed to a voracious dragon.

Do you like Florence by Mills products? Let us know your opinion in the comments box!

Pete Davidson will erase Ariana Grande from his life forever