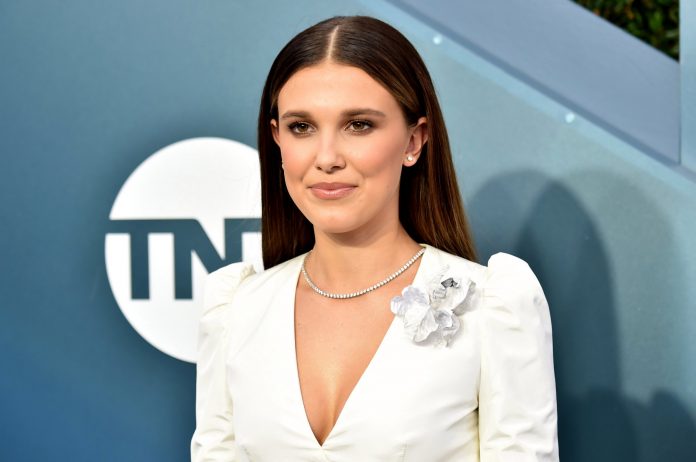 This Sunday February 14th via her Instagram story, Millie Bobby Brown sent an adorable message to her partner on screen Noah Schnapp!

Yesterday, Millie Bobby Brown shared some images from the 2020 SAG Awards on the Web. The star also took the opportunity to post a little message to her friend Noah Schnapp.

Millie Bobby Brown is one of the most followed stars on social media to date. On a daily basis, the star loves to interact with her followers on Instagram.

It can boast of having an incredible community with its 42 million subscribers. Class!

And her fans are always on the lookout when the actress posts something. Very often, the teenager is unanimous with her multiple publications.

As a true fashionista, Millie Bobby Brown always wows her admirers. The actress knows what suits her, and she rarely takes a fashion faux pas.

If on the red carpets the star often wears sophisticated outfits, he also sometimes wears casual outfits. While her clothing choices can intrigue journalists at times, she takes responsibility for whatever she wears!

“I’m not going to try to look like a 25-year-old,” Millie Bobby Brown told “Onlinefocus Swiss”. “That’s why you see me in sneakers on the red carpet. Diamonds and pearls are not my thing “.

In any case, this Sunday, February 14, the teenager seemed in a nostalgic mood. On the web, she shared videos of herself at the January 2020 Screen Actors Guild Awards.

MILLIE BOBBY BROWN AND NOAH SCHNAPP HAD THE SHOW AT THE SAGS OF 2020!

That evening an audience of stars made the trip to attend the event. And some actors of the series “Stranger Things” were also part!

To mark the occasion, Millie Bobby Brown had bet on a pretty Louis Vuitton outfit that attracted all eyes. According to “Elle”, it took more than “125 hours of work” and “7 meters of tulle” to make it!

On the red carpets, the star was also extremely complicit with her partner on screen Noah Schnapp. It was their duo and their complicity that the actress wanted to honor yesterday.

“I love you,” Millie Bobby Brown wrote to her sidekick. And in her post, she didn’t forget to tag him.

Outside the film sets, the two stars are very close. On the web, they love to make pretty statements.

In addition, the two comedians have already shot YouTube videos together. So at one time their fans thought they were a couple.

But according to the latest news, it is not! Case to follow we tell you.