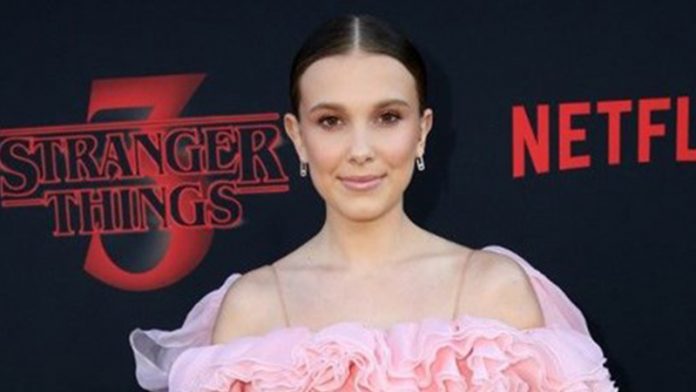 In the story of her Instagram account, Millie Bobby brown unveiled the new trailer for the movie Godzilla vs. Kong.

The first images of the movie Godzilla vs. Kong have been revealed! In the story of her Instagram account, Millie Bobby Brown proudly revealed them.

You’re waiting for the new Godzilla vs. Kong impatiently? That’s great: it will be available soon. Indeed, its theatrical release is scheduled for March 17 in France.

So by the time we are writing these words to you, it will be out in two months to the day. You will see, time will pass at a great speed.

Especially since Millie Bobby Brown isn’t going to let you hang around all alone in your corner. Yep, the famous 16-year-old actress wants to help you wait.

Thus, the one who was already present in Godzilla II – King of the Monsters in the guise of Madison Russell has revealed extracts from the trailer.

So, it’s in the story of her Instagram account that the little protégé of Miley Cyrus slipped them. Watch out for the eyes, the images are tearing!

To discover them, just slide your finger up and down in Millie Bobby Brown’s story. “Watch out, Madison is back,” wrote the pretty brunette.

So, will the teenager be featured in the movie trailer? It must be said that she is one of the main characters. This is what we will see!

MILLIE BOBBY BROWN CAN BE PROUD OF GODZILLA VS. KONG

One thing is certain, Millie Bobby Brown can boast of being part of the great cast of Godzilla vs. Kong. And this for the second time!

Especially since this film promises to be deadly. In fact, this is what the studio explained to accompany the trailer.

“In Godzilla vs. Kong, legends collide as these mythical adversaries meet in a spectacular battle of the ages, the fate of the world on the line, “he said first.

Before adding, “Kong and his protectors embark on a perilous journey to find his true home, and with them is Jia, a young orphan with whom he has forged a unique and powerful bond. ”

But as usual, nothing goes as planned. Thus, “they find themselves in the path of a rabid Godzilla wreaking havoc on the whole world. ”

However, the studio warns, “The epic clash between the two titans, brought on by unseen forces, is only a small part of the mystery lurking at the heart of Earth.”

So, viewers of Godzilla vs. Kong will be held in suspense by an impressive plot to say the least.

At the moment, of course, Millie Bobby Brown can’t reveal more about the film. Although the teenager would certainly be craving it.

His co-stars, Alexander Skarsgård, Rebecca Hall and Brian Tyree Henry must certainly think so. They too must remain silent. Yes, it’s hard. We know !