Home Celebrity Millie Bobby Brown comments on who, in her opinion, is easier to... 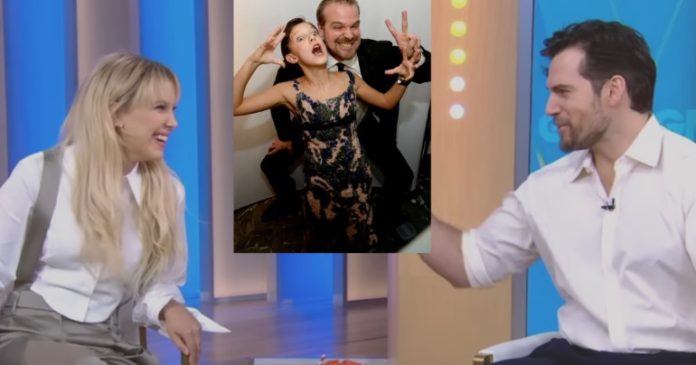 Millie Bobby Brown is no longer just an actress, she has become a brand. The 18-year-old actress has achieved huge success thanks to her different roles and charming character. She recently appeared as an aspiring detective named Enola Holmes alongside Henry Cavill as her brother Sherlock Holmes in the Netflix original movie titled Enola Holmes 2. Their acting in the movie was amazing, but when it comes to behind the scenes, we always let Millie tease one or the other of the film partners.

We’ve heard enough about the infamous character of the star of the TV series “Stranger Things”. She and her film partners, such as Noah Schnapp, Sadie Sink and others, fooled around with other artists, including David Harbour, behind the scenes. Well, this young actress couldn’t resist teasing her on-screen brother Henry Cavill. Now, during an interview for Enola Holmes 2, she revealed which of Cavill and Harbor was easy to tease.

Millie Bobby Brown revealed the name of her easy target

During the filming of a movie or show, actors have their own ways of communicating with their colleagues. Some artists tend to discuss the film or the movie they are shooting, or talk about the characters and try to engage in conversation. While others, such as Millie Bobby Brown, do funny things and tease their colleagues, creating a natural connection with them. She worked closely with David Harbor in the Netflix Original sci-fi supernatural drama and Henry Cavill in her detective thriller Enola Holmes.

And now she has revealed the name of her easy target in a recent interview. It turns out it was David Harbour, whom she likes to torment in between scenes.

She had to push Superman, which made her feel superior to this huge Witcher star, but it was David Harbor who was easily tormented by Eleven. If you really think about it, she portrayed the character, Eleven, longer than she played Enola Holmes. So she worked and spent more time with David Harbor, who was the father of Eleven in the series. She had plenty of time to think about the weaknesses of her partner in the film Harbor.

Well, that doesn’t mean she never tortured Henry Cavill, because she did. For this, Brown had to face the consequences. However, this is what makes her real character more interesting and charming. Anyone who can tell his partner that he is a terrible kisser can also do anything. And that’s why we love her character, Enola Holmes.

What do you think of Brown’s response? Have you watched Enola Holmes 2 yet?

Demi Lovato forgets her own songs

“Entanglement” by Jada Pinkett-Smith and August Alsina: a chronology of their...