Home Celebrity Millie Bobby Brown has changed a lot since she started! 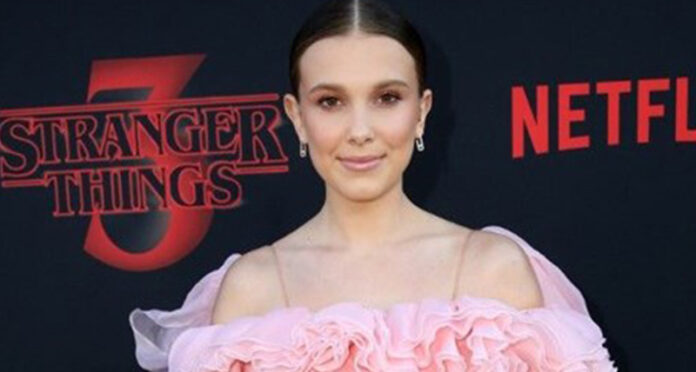 A Millie fan Bobby Brown unveiled a before / after of the young woman on his Twitter account. She has changed a lot since she started!

For years now, Millie Bobby Brown has managed to make herself known to the public thanks to her main role in the series Stranger Things. And the least we can say is that it has changed a lot and evolved since its inception.

Everyone remembers the little wild girl in the 1st season of Stranger Things. Completely shaved, with a very strong look, Millie Bobby Brown had immediately seduced thanks to her character in the series.

Over the years, Millie Bobby Brown has evolved as much as her character since its inception. Both have grown a lot. It seems that thanks to Stranger Things, the young woman was able to evolve.

Now 16, the beautiful blonde has become a real star around the world. Over the weeks, she connects projects and successes to the delight of her fans.

MILLIE BOBBY BROWN: HER FANS WONDER WITH WHO SHE IS A COUPLE

Portraits of Millie Bobby Brown as Madison O'Donnell in Intruders and Eleven in Stranger Things 3. pic.twitter.com/yC61Hnsdyf

A few weeks ago, Millie Bobby Brown promoted Pandora. She also does product placement for her beauty brand Florence by mills. Besides, because of her notoriety, several rumors are emerging about her.

For some time now, netizens have been claiming that the Stranger Things actress is in a relationship with another actor in the series. It’s Noah Schnapp. However, these are only rumors.

Recently, the young woman has also posted her couple with Jacob Sartorius on social networks. On the other hand, this idyll would not have held. The beautiful blonde would now be single.

It remains to be seen who will have the heart of the actress. In the meantime, it looks like she has only a friendly relationship with the actors of Stranger Things.