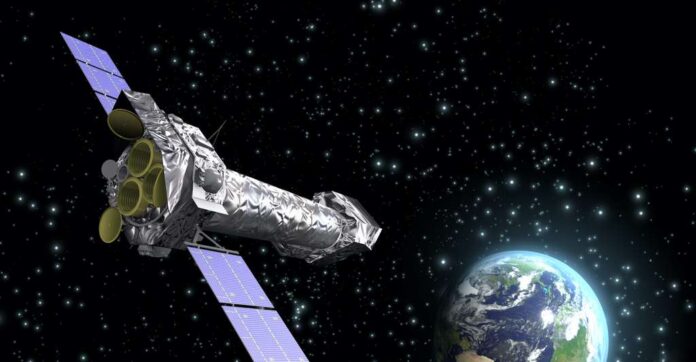 The galactic halo of the Milky Way is much warmer than scientists have estimated in the past. These new results could help astronomers better understand the process of galaxy formation.

Galaxies are … fuzzy objects. Although we often think of them as discs, globes or sombreros with well-defined contours, their borders are actually much more diffuse than the views of artists suggest. On the periphery of these cosmic giants, there is indeed a set of old and erratic stars, gas and, theoretically, dark matter, constituting what is called a galactic halo.

The transition between the body of galaxies and their halo is imprecise. It even happens that certain stars of the periphery take a trip through the center of the disc, animated by their own movement. More generally, the halos themselves are still relatively vague and misunderstood objects for researchers, who are still trying to explain how these influence the speed of rotation at the edges of their galaxies. Some theories even postulate the existence of Machos and Wimps (wimps in English) in the halo, compact and dark objects respectively. But today, it’s its temperature that interests us.

A study by the Ohio State University had already challenged the first estimates for the temperature of the halo of our Milky Way, raising the thermometer to 10 million degrees Kelvin for the most extreme regions. Nevertheless, new results seem to suggest that these high temperatures could be found throughout the halo. “We cannot say with certainty that this is the case everywhere, because we have not analyzed the entire halo,” explains Smita Mathur, principal investigator of the study and that which preceded it. “But we now know that the temperatures we observed in the first study are not exceptional, and it’s very exciting. ”

Tracing the history of galaxies

The galactic halo holds a lot of information that can inform researchers about the formation process and the evolution of galaxies. In a way, it constitutes the missing link between its galaxy and the rest of the Universe. This discovery therefore constitutes a new stage in the understanding of our nebula entity. The data analyzed by the Mathur team come from the XMM-Newton space observatory, developed by Esa and intended for the collection of X-rays, which inform us about the formation of stars, galaxies, the distribution of matter. black or the existence of supermassive black holes. To supplement this information, researcher Anjali Gupta also looked at data from the Japanese satellite Suzaku, which confirmed that the observatory had not simply recorded an aberration. The observation of NGC 3221, similar to our Milky Way, gave similar temperatures, suggesting that the numbers could be revised upwards for more than one galaxy in the Universe.

Milky Way: composition and temperature of the halo surprise astronomers

The Milky Way is surrounded by a halo of dust, gas and dark matter. And researchers tell us today that it is hotter than astronomers previously thought. It is also made up of different chemical elements from what they imagined.

XMM-Newton. It is the name of a telescope launched in 1999 by the European Space Agency (ESA) and intended to observe space in the field of so-called soft X-rays. And thanks to this instrument, astronomers have just discovered that the gas hiding in the halo of our Milky Way reaches temperatures much warmer than they thought. Its chemical composition would also be different. What to question what we know about our Galaxy.

Why ? Because the characteristics of a galaxy’s halo – that vast region of gas, stars and dark matter that connects us to the Universe – are said to depend on its mass and play an important role in its evolution.

Work based on XMM-Newton data shows that the halo of our Milky Way contains not one, but three different components of hot gases. The hottest of them appearing ten times hotter than what astronomers previously thought. “Some of the gas in our Galaxy’s halo reaches 10 million degrees,” said Sanskriti Das in an ESA statement. Never has such a structure been observed elsewhere in the Universe.

And it probably was thanks to the exceptional duration of the observations carried out using XMM-Newton: three weeks. Whereas previous observations of our Milky Way’s halo were limited to periods of a day or two. This time, astronomers believe they have been able to detect signals that were previously too weak to be seen.

The researchers actually analyzed the intense light of a blazar – the very active nucleus of a distant galaxy – after it passed through the halo of our Galaxy. The spectral signatures recorded made it possible to go back to specific temperatures. And the question now arises for astronomers of the mechanism behind this amazing temperature. “We think that gas is heated to about 1 million degrees when a galaxy forms,” ​​says Sanskriti Das. How can the gas then heat up further? Perhaps by the action of the winds emanating from the star disk of the Milky Way.

The researchers also concluded that there was an unexpected chemical composition. Elements heavier than helium, for example. What to think that the halo of the Milky Way is powered by elements projected by stars at the end of their life. Rather massive stars, because the halo contains proportionally less iron than our Sun. It also contains less oxygen, which may have been captured by dust particles. “It’s really exciting,” reports Sanskriti Das. “We still have a lot to learn about how our Galaxy has evolved. ”

Especially since astronomers imagine that these hot components of the halo of the Milky Way could be found in other halos of galaxies. And, as they had never been observed in the past, contain a significant amount of the famous missing material!

Statement by Scientists: It Is Impossible to Take Control of the...