Home Celebrity Miley Cyrus Could Include Cardi B And Shawn Mendes In Her New... 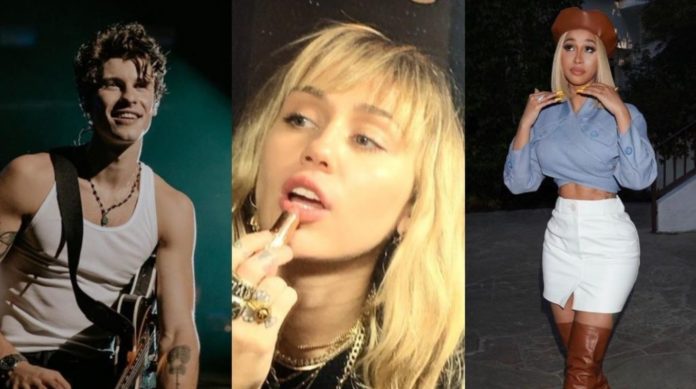 Miley Cyrus Could Include Cardi B And Shawn Mendes In Her New Album. Miley Cyrus intends to release two more albums to accompany “She Is Coming”, and with these, create a trilogy; which could be called, “She Is Miley Cyrus.” The singer is in the second stage, in which the second EP is about to begin, all this, after having released “Slide Away”.

After a live broadcast made by Cyrus, she could have accidentally revealed what will come for the next album, and among some of the words that appear scribbled, you can see the name of the rapper, Cardi B and the Canadian, Shawn Mendes OMG!

You can even see the names of some new titles such as “Sagittarius”, “Golden G String” and “Naked”, the latter in which it seems to make the colab with Cardi, while Shawn Mendes could be participating in the single titled “Playing With Fire.”

At the moment, none of the three artists have said or confirmed anything, and you cannot see more than what the capture offers us. At the moment, we can only wait for one of them to release the news, that is Miley herself who gives us the good news.