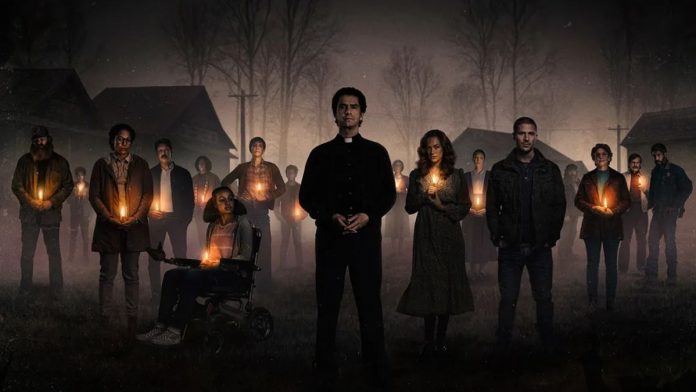 Midnight Mass: The apocalypse comes to Crockett Island, where Flanagan masterfully articulates the relationships between the various characters. The entire town is crowded inside St. Patrick’s Church, a small parish in the island town of Crockett. The chorus of voices resounds, the timbre echoing in unison as the two altar boys enter the building, closely followed by Father Paul (Hamish Linklater), who raises the cross of Christ as he makes his way to the altar. Midnight Mass, Mike Flanagan’s new Netflix miniseries, plunges into the life of this town, deeply rooted in Catholic tradition.

The creator of The Curse of Hill House and the Curse of Bly Manor, series also available on Netflix, returns to the supernatural genre, but channels it through a dramatic and suspenseful story, which is built on each and every one of the protagonists. Zach Gilford (Friday Night Lights) masterfully portrays Riley Flynn, a boy who abandoned his dull and quiet Crockett life to build a successful career in the big city, but …

Everything changes the moment he runs over a girl in a drunken state. It is shocking to see him pray while the paramedics unsuccessfully try to revive the woman, who lies between glass and blood. Shortly after, one of them comes to treat Riley’s superficial wounds and berates him for his actions. During his stay in prison, his guilt eats away at him and takes him away from the religion he had embraced all his life. And then, after serving his sentence, he returns again to Crockett, where he awaits a loving mother, a father haunted by doubts and a teenage brother.

The mass as a catalyst for a people

The narrative flows at the beginning through the character of Flynn, who helps us to get to know the inhabitants of the island. His return puts in the mirror what others think of him, and at the same time, allows us to inquire into his personalities. At the same time, the elderly priest of the town, Monsignor Pruitt, is replaced by Father Paul. Apparently, or so Paul tells them, the priest is admitted to a hospital due to a strange illness.

There is an element that unites almost all the people, religion. For this reason, characters like Flynn or Sheriff Hassan (Rahul Kohli) contrast with the majority of inhabitants. The first declares himself an atheist and the second a Muslim, circumstances that Flanagan uses to reflect the discriminatory treatment, which is mainly embodied by the policeman. In the end, mass and communion function as a kind of link between all of them, an apparently unbreakable bond, an appointment that no one should miss. Like it or not, everyone ends up listening to Paul’s sermons, monologues that take the form of the soliloquy and express the ideas and contradictions that shape the protagonists.

The biblical story is intertwined with the supernatural events that Crockett is experiencing and which eager devotees interpret as the so-called God. But at the same time, characters who claim to be close to Jesus Christ come out devious and unscrupulous, such as Bev Keane (Samantha Sloyan), selfish, unsympathetic and full of prejudices.